Since they appeared on the scene a year or two ago, lawyers ACS:Law have made a lot of enemies. This week the rage of the masses boiled over and the hordes of 4chan, Anonymous and those simply wishing to dig the knife in, helped to DDoS the company’s site from the Internet.

Then, in a huge screw up, ACS:Law managed to expose backups of its entire website and email database to the outside world. Last night they were all over the Internet for everyone with a huge amount of patience to decode and read.

As we read yesterday, company owner Andrew Crossley was happy to brag of how much money he’d been making so today, in the second of what is likely to be a long string of articles, we take a look briefly at the human cost of what ACS:Law have been doing.

A single mother of two explains how her husband who left her the previous year could have been responsible for the infringement and offers to pay the ‘fine’ of £495 in instalments for £20/£30 per month. Despite ACS:Law accepting that the lady did not infringe, a company employee advises “I believe this [the offer to pay in instalments] should be accepted.”

Another case where a woman wrongfully accused finds out her son carried out the infringement was forced into paying on his behalf, despite the fact that she was neither liable nor responsible.

Having received your letter dated 9th April 2010 regarding the downloading of a film named “Her First Monster Beak’ I would like to inform you that neither I nor my husband have downloaded this film and are quite confused by these accusations. Neither of us would know how to download a film via the Internet as we have only been using the Internet for a short period of time since our retirement.

I am a Lady in my 70’s and my husband and I can just about use the Internet to read the news and email our children. We are both extremely confused as to your claims that our Internet connection has been used to download this film and strenuously deny this infringement. 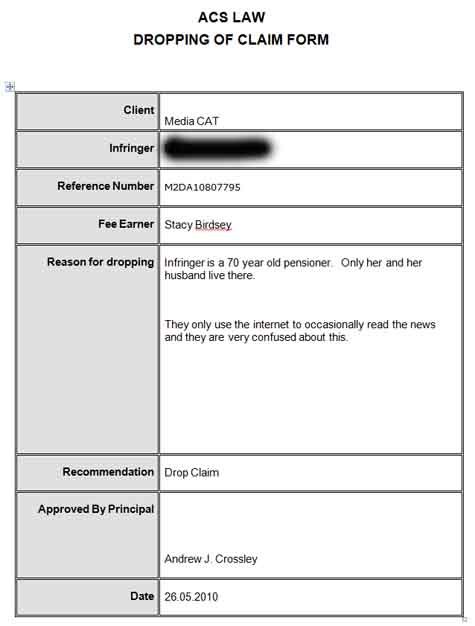 While noting that many letter recipients seemed very confused by the letters, it was particularly interesting to see that many simply refused to be bullied and had clearly been using the advice issued by both BeingThreatened.com and that available in the discussion threads on Slyck.com.

Many seemed to very aware of the limitations of the evidence and also their obligations under the law – if it couldn’t be proven that they infringed or authorized others to do so, ACS:Law had nowhere to go except send out their “Bare Denial” template letter, which basically asked people to prove a negative, i.e that they didn’t do anything.

A ‘bare denial’, however, is accepted on other occasions. As this huge mass of emails makes abundantly clear, this scheme is all about money and when people don’t have any, Crossley and friends aren’t interested. A woman who denied sharing anything but provided documents proving she was bankrupt was immediately left alone.

ACS:Law use an internal form titled ‘Action Points’ which charts the progress of a claim. An example is shown below where someone appears to be pursued based on a telephone confession:

We have hardly reached the tip of the iceberg with these emails, there are many hundreds left to go but even at this stage, things are certain. Nearly all emails revolve around money. Money being demanded, money being transferred from one company to another. Emails promising employees of more money if they do this, that. Emails to companies telling them how much money they can make by becoming a partner in all of this.

This is not about copyrights and reducing piracy. Copyrights are simply being used as a method to generate money. Thus far, we have not seen a single email or piece of correspondence which talks about reducing piracy.

The only thing we see is money. And misery. But now, due to this email leak, that pain is being more evenly distributed out.