ACS:Law Take Alleged File-Sharers To Court – But Fail On a Grand Scale 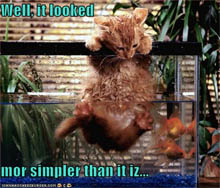 The Patents County Court in the UK has slammed a messy attempt by law firm ACS:Law to get default judgments against 8 internet connection owners who it is claimed infringed or allowed others to infringe copyrights.

The case between Media C.A.T Limited and 8 unnamed and unrepresented defendants was heard before Judge Birss QC. ACS:Law must’ve thought they were going to shoot fish in a barrel. What they didn’t expect was that they and Media C.A.T turned out to be the fish and it was the judge, not them, holding the gun.

“This judgment deals with a series of Requests for Judgment made by the claimant in eight parallel actions. The claimant is the same but the defendant is a different individual in each case. The cases are separate but they raise issues in common and the requests for judgment were received by the Court at the same time. It is convenient to deal with them together,” began Judge Birss in his ruling.

The claimant in the case was Media C.A.T, a company which “represents various owners or exclusive licensees of copyrighted works (“Rights Owners”) to monitor and protect their copyrighted works from acts of infringement.”

For those unfamiliar with Media C.A.T, it is a kind of ‘front company’ for rightsholders being represented in the UK’s well known ‘speculative invoicing’ schemes which target illicit file-sharers. It neither produces nor owns any media of its own.

Monitoring of alleged infringements was carried out by NG3 Systems Limited (a company referred to heavily in the ACS:Law leaked emails). It was noted that the company logged infringements between 30 May 2009 and the end of November 2009.

The Particulars of Claim in the case state:

“By reason of the infringement(s) the claimant has suffered loss and damages and by this claim seeks compensation for the loss and damages suffered together with an injunction against the defendant to prevent repetition of the infringement and/or an injunction to compel the defendant to take adequate measures to effectively secure their internet connection.”

Judge Birss somewhat politely described the cases presented as having “a number of unusual features.”

1. The claimant, Media C.A.T, is not the rights holder of the works in question. A copyright case can only be brought by the owner of a copyright or an exclusive licensee. Indeed, the Judge later noted that: “There is no plea that the works qualify for copyright protection at all.”

2. “The Particulars of Claim include allegations about unsecured internet connections. I am aware of no published decision in this country which deals with this issue in the context of copyright infringement,” wrote Judge Birss.

3. “The plea that ‘allowing’ others to infringe is itself an act restricted by s16 (1)(a) and 17 of the 1988 Act is simply wrong,” noted Judge Birss. “The term used by those sections of the Act is ‘authorising’ and the difference may be very important if the allegation is about unauthorised use of an internet router by third parties.”

Judge Birss later noted: “A key part of the plea of infringement rests on an assertion [by ACS:Law] that ‘allowing’ others to infringe is itself an infringing act, when it is not.”

Judge Birss then goes on to explain that the Particulars of Claim presented by ACS:Law “are defective on a number of somewhat technical but important grounds”, including non-compliance with at least four Civil Procedure Rules.

ACS:Law took these cases to court on November 30 where they asked for default judgments, stating:

The defendant has not filed an admission or defence to my claim, or an application to contest the court’s jurisdiction and the time for doing so has expired. I request that judgment be entered for an amount including costs, to be decided by the court.

In respect of two defendants, the Judge decided that they had failed to respond to court papers, which meant that they were, in principle, in default. However, in three other cases, defendants had actually responded to the court papers with their defense.

“There is no conceivable basis for default judgment in these two cases,” wrote Judge Birss. “The requests for judgment should never have been filed.”

The Judge offered his summary as follows:

“In two cases it appears the defendant is in default, in three others there is simply no evidence proceedings have been served and I refuse to find that they have been and in the final three cases the defendant has responded to the claim, filed a defence and is not in default at all.”

The end result was that ACS:Law were denied default judgments in each and every case.

“I should end by recording that I am not sorry to have reached the conclusion I have in refusing all the requests for default judgment,” noted Judge Birss, later adding:

“In all these circumstances, a default judgment arrived at without notice by means of an essentially administrative procedure, even one restricted to a financial claim, seems to me to be capable of working real injustice.”

So, rather than living up to his word that he would bring proper, full and properly defended cases to court, ACS:Law owner Andrew Crossley has again taken what will be viewed by many as the coward’s way out. Those same observers will be absolutely delighted that these bullying tactics have failed in such epic fashion.

BeingThreatened.com finds it interesting that ACS:Law have failed in their first attempts to acquire default judgements. The judge is taking a dim view of the accusations, especially with reference to the attempted injunction; and whether ‘allowing’ comes anywhere close to the legal definition of ‘authorisation’. Such analysis at an early stage by the judge and court likely to hear any forthcoming cases should be encouraging to threatened innocent parties.

Future cases may well hinge on some of the issues the judge mentons in discussionon which he appears well qualified and knowledgeable. Amusingly, it appears that at least one of the allegedly libellous accusations on Slyck.com is entirely accurate: ACS:Law are not the best at getting things right.