Adult Movie Outfit is Most Litigious Copyright Plaintiff in U.S.

Ever since the rise of peer-to-peer file-sharing more than 15 years ago, the practice has become closely connected to copyright lawsuits. Initially sites and services became entertainment industry targets but in time Joe Public became the focus of legal action.

From around 2003 the practice was led by the RIAA but after five years targeting tens of thousands of people (a loss-making exercise focused on sending an ‘educational’ message), the music industry decided to back off. Soon after, however, a new group of plaintiffs would hit the scene, arguably more cynical than the labels had ever been.

Spanning all copyright litigation since 2009, the report dedicates a section to the activities of trolls and the outcomes of almost 6,000 file-sharing related cases. For those who follow file-sharing cases closely, it comes as little surprise to read that one company in particular leads the way.

Out of more than 6,050 cases filed since January 2009, adult movie company turned copyright troll Malibu Media leads the way with a staggering 4,332. That total not only makes the company the most litigious in the file-sharing space, but also the most litigious copyright plaintiff in the United States, period.

Malibu Media’s excesses in this area are further underlined when comparing them to other companies engaged in similar activity. The company set up to pursue downloaders of the movie Dallas Buyers Club sits in second place with a relatively measly 274 cases, fifteen times fewer in volume than Malibu.

The remaining places are heavily occupied by adult movie copyright trolls interspersed with the likes of Manny Film and Voltage Pictures. 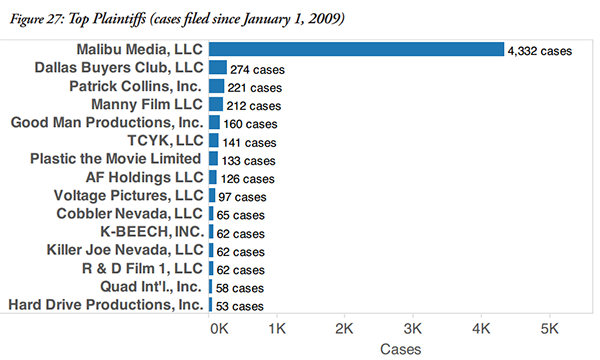 Perhaps of most interest is how these thousands of cases are concluded. In their threatening letters to alleged file-sharers, all of the above warn of court cases and massive damages if an arrangement isn’t reached. However, according to the report only 137 cases went to court in the period, with 126 concluded via default judgment, 10 via consent judgment and just a single case settled via full trial.

Overall, it’s estimated that 90% of all file-sharing cases are concluded with some kind of settlement. That’s compared to a 64% settlement rate evident in other copyright cases.

Given the volume of cases filed it’s no surprise that Malibu Media are out in front with both cases in court (66) and total damages received ($3.05m). However, the people behind the animated movie Zambezia are more efficient, with more than $330K culled from just three cases.

Also of interest are the locations where most copyright troll cases are being filed.

“File sharing cases are concentrated most highly in the Northern District of Illinois (936), followed by the District of Colorado (601) and the Eastern District of Pennsylvania (580),” the report notes.

In recent times the District of New Jersey has become the district of choice, setting a record of 139 cases filed in the first quarter of 2015.

Interestingly these locations can provide an indicator of the kind of damages a file-sharer can expect if he or she fails to appear in court to mount a defense.

“Among the top 20 busiest districts awarding statutory damages for consent or default judgments, the Southern District of Indiana stands out for having the highest median award ($51,800),” the report notes.

Statistically, cases in the District of Oregon prove less expensive for defendants. After handling eight cases, the Court awarded an average of less than $1,000 to the plaintiffs.

With more and more cases being filed every single week, the copyright troll phenomenon is showing no signs of letting up in the United States. It is clearly a profitable exercise for many involved, Malibu Media in particular, to the point where it’s now considered a revenue stream in its own right.