With over 10 million viewers AMC’s Fear The Walking Dead broke rating records for a series premiere.

This success directly translates to illegitimate channels where over a million people downloaded the first episode quickly after its release.

AMC is not ignoring this unauthorized audience and has started to send out warnings to ISPs across the United States. TF has seen several warning letters targeted at U.S. Internet users.

The company wants the affected subscribers to “remove or delete all unauthorized copies” and ensure that their account is “no longer used to copy or distribute” the episode(s).

The warnings are sent through AMC’s anti-piracy partner MarkMonitor. They’re formatted as DMCA notices and their main purpose is to inform subscribers that someone is using their Internet connection to pirate the show.

“AMC believes that subscribers have a right to know when their Internet accounts are being used for content theft, or if they are otherwise unwittingly downloading or distributing files that are subject to copyright protection,” the notices read.

In addition to users of standard BitTorrent clients and Popcorn Time, they’re also targeting the eDonkey network as the example below shows. 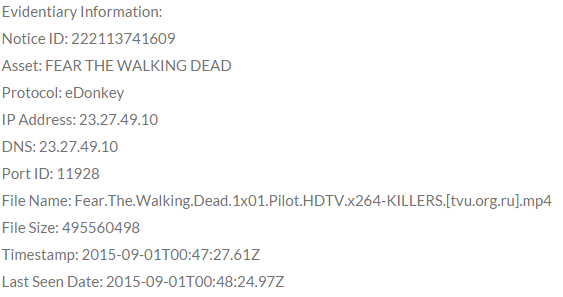 The notices further suggests that file-sharing can expose users to great dangers. It specifically mentions a consumer alert that was issued by the US Federal Trade Commission (FTC) a few years ago.

“Online content theft can expose a family’s home network and the computers connected to it to dangerous viruses, spyware and identity theft,” the notices explain.

While some casual file-sharers may be spooked by the warning, these types of DMCA notices are quite standard. The copyright holder doesn’t know the identity of the alleged pirates, so there are no legal strings attached.

Nonetheless, AMC hopes that the warnings will deter some from downloading future episodes. And indeed, some users may panic when they see that their downloads are being flagged.

Others may respond by hiding their ISP IP-address from showing up in public, which appears to be quite effective in this case.

In addition to targeting torrent users AMC also targets torrent sites directly. Many original uploads of the first two episodes have disappeared from KickassTorrents and other sites in recent days.

Unfortunately for AMC torrents are like zombies, in a way; they keep coming back to life and are nearly impossible to kill.