In July the movie streaming site MovieTube was sued by the MPAA, which tried to shut it down with a broad injunction.

Last month a coalition of global tech firms including Google, Facebook, Twitter protested the MPAA’s request, which would require search engines, ISPs and hosting companies to stop linking to or offering services to MovieTube.

The MPAA eventually dropped the request as MovieTube shut down voluntarily, but we can expect more of these requests in the future. In fact, they are already quite common in the fashion industry.

This year alone Gucci has targeted hundreds of “infringing” websites that sell knockoffs without permission, and the fashion icon has no trouble getting courts to shut these sites down through similar injunctions.

Gucci’s most recent case was filed three weeks ago (pdf). It targets 221 websites and is similar to lawsuits that were filed previously, which accuse site owners of selling counterfeit merchandise.

In the complaint Gucci asks for a preliminary injunction to prevent all third parties from doing business with the site. This includes payment services, social networks and other online services. 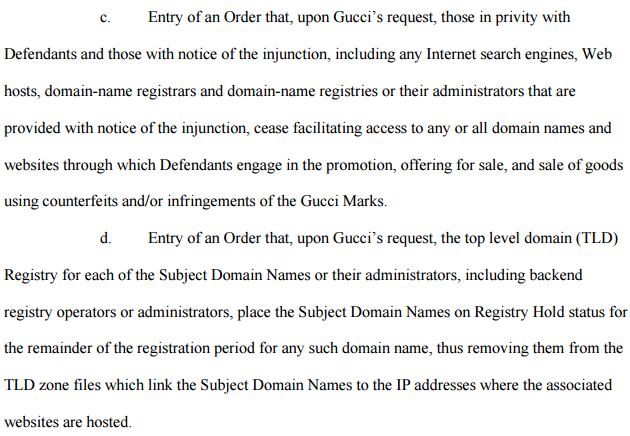 While this case is still pending, the designer company has had success with previous requests. In May, for example, Gucci obtained an injunction which prohibits search engines from linking to 184 sites, while ordering domain name registrars to hand over the domains.

Unlike with the MovieTube case, there has been little public outcry about the Gucci cases. However, the Electronic Frontier Foundation believes that they pose a significant threat.

“The Gucci cases are certainly of concern for the same reasons as the MovieTube case, and they deserve more public scrutiny,” EFF attorney Mitch Stoltz informs TF.

“Vaguely written orders that could be used to co-opt numerous Internet intermediaries into blocking or filtering websites are an abuse of the law and threaten some of the same harms as the infamous SOPA bill did,” he adds.

In all fairness, Gucci shouldn’t get all the ‘credit’ here. Several other designer brands have successfully requested similar injunctions in the past, including Louis Vuitton and Chanel.

Similarly, media company ABS-CBN has been granted broad injunctions by American courts before.

Still, none of these cases triggered the same response as the MovieTube case did. Perhaps the involvement of the MPAA was needed to really hit a nerve with the tech companies?

In any case, it’s clear that Hollywood isn’t setting the trend here, they’re simply following a path already laid out by others.