Over the past few decades there have dozens of campaigns aimed at preventing people from either copying, downloading, or sharing pirated content.

From ‘Don’t Copy That Floppy’ to ‘You Wouldn’t Download a Car’, these campaigns have enjoyed questionable success but at least in the case of these examples, getting the actual anti-piracy ads out there hasn’t been a problem.

Millions of people have seen these shorts over the years, which if nothing else is a great start. Interestingly, a new anti-piracy campaign appears to have hit the jackpot too, in a mysterious way.

Internet Matters promotes itself as a not-for-profit organization with a simple purpose – “To empower parents and carers to keep children safe in the digital world.” Undoubtedly this is a noble goal, particularly given all the perils on the Internet today that most if not all of us would like to avoid.

Just over ten days ago, Internet Matters launched an anti-piracy campaign, aiming to inform parents and carers on the dangers of “streaming from unauthorized sites” so that they can educate children on how to avoid “age-inappropriate content, disturbing pop-ups and cyber threats.”

To accompany the campaign, Internet Matters launched three videos on YouTube featuring what they describe as “real parents” discussing the above.

All anti-piracy campaigns attract our attention so we make a point of monitoring how successful they are in terms of reach and views. Given that the videos are Internet Matters releases are relatively bland and not at all controversial, we were shocked to learn that a little over a week after their launch, they were a roaring success on YouTube.

The first video, claiming that malware obtained through pirate sites can hijack a user’s camera, received more than 250,000 views. The second, covering the “general dangers” of digital piracy, achieved 245,000 views. While this is a great achievement, alarm bells began to ring on a number of fronts.

Despite attracting all of those eyeballs, at the time of writing not a single person has commented on either video. Even more curious is that the first video has only 5 votes (3 up, 2 down) while the second has only a single vote, period. For videos that are so popular, that is pretty remarkable.

That brings us to the third video, which in content terms is close to the first two, but this time talking about pirate sites allegedly stealing users’ details so they can empty their bank accounts. Bearing in mind all three videos were released on the same day, as part of the same campaign, and listed alongside each other on the Internet Matters site, this one is a massive failure. 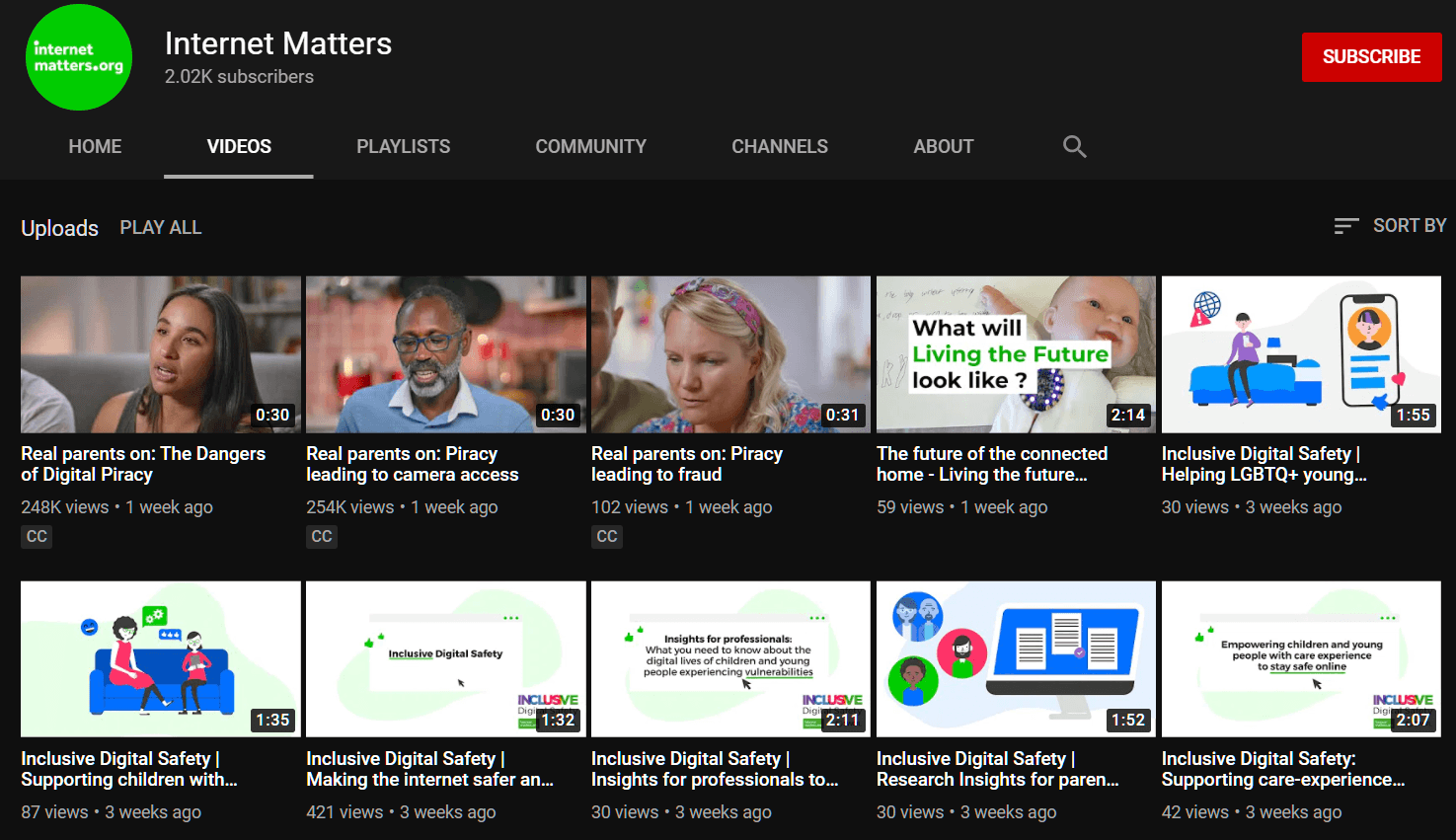 As the image above shows, at the time of writing it has just 102 views, despite being extremely interesting from a parental point of view, at least when viewed through the prism of the other videos. That being said, it has accumulated slightly more hits than the average video recently released by the Internet safety group.

Comparisons With Recent Anti-Piracy Campaign in the US

The reason for the above catching our eye is the contrast with a very similar anti-piracy campaign launched in the United States more than a month ago.

Combining the resources of the MPA, Alliance for Creativity and Entertainment, and none other than the US Government’s Department of Homeland Security, the ‘StreamSafely’ campaign also came with a selection of piracy-deterring videos of its own.

At the time of writing the main video, featuring TV host and journalist Katie Linendoll, has achieved 208 views. Another from her, on ‘safe streaming alternatives’, currently has 47 views. A third has done relatively well, with 585. A fourth, featuring Steve Francis from Homeland Security, has just 91 views.

When all views of all four videos are added together and generously rounded up, that’s less than 1,000 views in total, despite the weight of most of the major video entertainment companies in the world (and the US Government) supporting it. Now compare that with Internet Matters’ first two videos, which currently have half a million each. Then the third one….with barely over a hundred.

The Results in Both Campaigns Defy Explanation

Quite why the StreamSafely campaign appears to be a disaster and why Internet Matters hit the jackpot with two videos but failed as badly as the US with the third is, quite frankly, a mystery. That said, it’s perhaps worth pointing out that Internet Matters, despite describing itself as an organization, is actually a limited company being funded by some of the biggest names in broadcasting including Sky, BT, Virgin Media and NowTV.

In fact, according to traffic analysis, Virgin is responsible for 50% of the visits to Internet Matters’ website, with Sky sending roughly 10%. Even then, however, Internet Matters only receives around 250,000 visits per month in total according to SimilarWeb, which means that every single one of those visitors would’ve been needed to view the first two videos once each, to reach the quarter-million mark.

Even then there are problems as these results were achieved in just 10 days so something, somewhere, doesn’t add up, especially when the lack of YouTube comments is taken into consideration.

Things just don’t get this ‘popular’ without someone expressing an opinion or at least clicking the thumbs up/down buttons. And then completely omitting to view the third video, losing it 250,000 views over its stablemates, of course. It’s possible that someone, somewhere embedded the first two videos on a very popular site to get all of those eyeballs in such a short space of time but where that might be is unknown.

If that’s indeed the case, however, the US campaign might want to exploit the same method because, at the moment, almost no one has watched the videos, let alone heeded their message.