The avalanche of negative file-sharing news over the past weeks hasn’t gone unnoticed to users and site operators.

From SOPA to Megaupload, there is a growing uncertainly about the future of sharing.

While many BitTorrent sites and cyberlockers continue to operate as usual, there is a growing group of users who are expanding their horizons to see what other means of sharing are available if the worst case scenario becomes reality.

Anonymous, decentralized and uncensored are the key and most sought-after features. For some this means signing up with a VPN to make their BitTorrent sharing more private, but new clients are also generating interest.

Earlier this month we wrote about Tribler, a decentralized (not anonymous) BitTorrent client that makes torrent sites obsolete. We’ve covered Tribler for more than half a decade, but it was only after our most recent post that it really took off with more than a hundred thousand downloads in a few days.

But there are more file-sharing tools that are specifically built to withstand outside attacks. Some even add anonymity into the mix. RetroShare is such a private and uncensored file-sharing client, and the developers have also noticed a significant boom in users recently.

The RetroShare network allows people to create a private and encrypted file-sharing network. Users add friends by exchanging PGP certificates with people they trust. All the communication is encrypted using OpenSSL and files that are downloaded from strangers always go through a trusted friend.

In other words, it’s a true Darknet and virtually impossible to monitor by outsiders.

RetroShare founder DrBob told us that while the software has been around since 2006, all of a sudden there’s been a surge in downloads. “The interest in RetroShare has massively shot up over the last two months,” he said.

“In January our downloads tripled when interest in SOPA was at its peak. It more than doubled again in February, when cyberlockers disabled sharing or shut down entirely. At the moment we are getting 10 times more downloads than in December 2011.”

RetroShare’s founder believes that there is an increased need for security, privacy and freedom among file-sharers, features that are at the core of his application.

“RetroShare is about creating a private space on the Internet. A social collaboration network where you can share anything you want. A space that is free from the prying eyes of governments, corporations and advertisers. This is vitally important as our freedom on the Internet is under increasing threat,” DrBob told TorrentFreak.

“RetroShare is free from censorship: like Facebook banning ‘obscene’ breast-feeding photographs. A network that allows you to use any pseudonym, without insisting on knowing your real name. A network where you will not face the threat of jail, or being banned from entry into a country for an innocent tweet.” 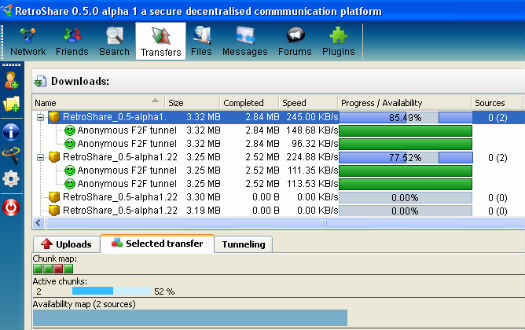 It’s impossible to accurately predict what file-sharing will look like 5 years from now. But, a safe assumption is that anonymity will play a more central role than it ever has.

Recent crackdowns have made operators of central file-sharing sites and services more cautious of copyright infringement. Some even went as far as shutting down voluntarily, like BTjunkie.

In the long run this might drive more casual downloaders to legitimate alternatives, if these are available. Those who keep on sharing could move to smaller communities, darknets, and anonymous connections.