While there have always been suspicions that anti-piracy outfits are actively DDoSing torrent sites, when the boss of the Indian company AiPlex Software admitted to using these tactics in public it still came as a shock.

“When we detect a website offering a link or a download, we contact the server hosts and intimate them about the illegal activity. They issue a notice to the site owner,” said AiPlex’s Girish Kumar in an interview with DNA.

The above is nothing out of the ordinary, but where other content protection companies stop, AiPlex takes it up a notch. Uncooperative sites are not ignored but can expect to be taken offline by force.

“The problem is with torrent sites, which usually do not oblige. In such cases, we flood the website with requests, which results in database error, causing denial of service as each server has a fixed bandwidth capacity.”

“At times, we have to go an extra mile and attack the site and destroy the data to stop the movie from circulating,” Kumar said.

In other words, AiPlex admitted to breaking the law by DDoSing several websites. This confession wasn’t received well by sympathizers of torrent sites, and under the name “Operation Payback” Anonymous took out the company’s website for several weeks.

Today, a year later, AiPlex is still claiming to be hurt by the unusual openness of their boss. In an attempt to make it all go away, they are trying to rewrite history by asking people who reported on the news to pull their posts. Several site owners forwarded us the same request, which is posted in full below.

“We kindly request you to deactivate the link as the article is defaming the company’s image & its prospects. It was mis-interpreted by the news agency which was blown out of proportion by some of the pirates across the globe,” the email starts.

It further notes that the company is still suffering immense losses due to threats and continuous attacks from pirates.

As we’ve seen before, the email from AiPlex also claims that the words of their boss have been misinterpreted. But this seems unlikely. The verbatim quotes can only be interpreted in one way and several torrent site owners told TorrentFreak that they were indeed threatened and attacked by AiPlex in the past.

Interestingly, AiPlex has yet to contact TorrentFreak with a takedown request. This is odd since we are the source of all the articles that AiPlex is desperately trying to pull offline. Also, the original DNA article on which we based our report still remains online, completely unedited.

The irony of it all is that Aiplex’s attempt to rewrite history have only resulted in attracting more attention for the mistakes they made in the past. For a tech company they seem to understand very little about how the Internet works, and they definitely have never heard of the Streisand effect. 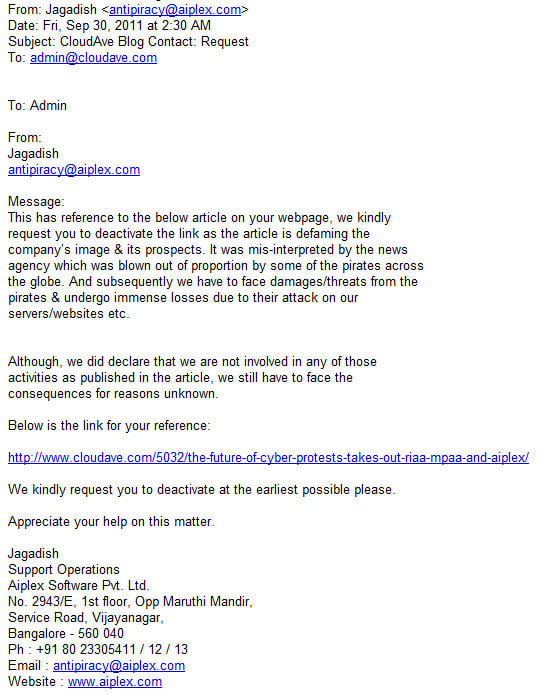