Back in April, members of the Australian Recording Industry Association (ARIA) and Australasian collecting society APRA AMCOS teamed up to file the music industry’s first ‘pirate’ site blocking application Down Under.

Filed at the Federal Court under section 115A of the Copyright Act 1968, member labels Universal Music, Warner Music, Sony Music and J Albert & Son demanded that then leading torrent site KickassTorrents (KAT) should be blocked by the country’s ISPs.

Arguing that KickassTorrents showed a “complete disrespect for music creators and the value of music”, the industry groups asked leading ISPs Telstra, Optus, TPG, and Foxtel to stop their subscribers from accessing the site. However, during the summer that job was effectively carried out for them by the US Department of Justice, which shut down KickassTorrents and had its owner arrested.

But despite the disappearance of the site, the Aussie case has continued. The music industry is now focusing on the many clones, copies, and wannabees that are using the KickassTorrents name to get traffic, despite having nothing to do with the original site.

This week the parties were back in the Federal Court. The ISPs aren’t fighting the blocking demand per se, but as usual there’s a dispute over who will foot the bill for legal proceedings and will shoulder costs of implementing the blockades.

None of the ISPs are objecting to paying for the blocking systems to be put in place. However, they want rightsholders to pay for the initial implementation and ongoing maintenance of a block, which according to ComputerWorld will be put in place for three years.

ISP Optus estimated a cost of AUS$12,500 (US$9,533) to put blocks in place. TPG informed the court that following initial setup, each domain name would cost $50 to block.

Simplifying the rolling injunctions demands made by the movie and TV industry in the blocking case against The Pirate Bay and others, the music industry is seeking straight-forward DNS-based blocking backed up by a system which would block subsequently appearing clones, mirrors, and proxy sites.

The record labels and their allies foresee an application to the court containing details of any site they wish the ISPs to block, with the ISPs given 10 days to object to the blocking demand. The court would then decide whether the parties would need to appear before another hearing in advance of the domain being added to the blocklist.

Of course, KickassTorrents no longer exists so the continuing of a case to have it blocked is somewhat unusual, to say the least.

Illustrating just how far removed the case has shifted from its original aims is an image posted by CNET, which shows the original domains the industry wanted blocked, and how that has completely changed following the demise of KAT. 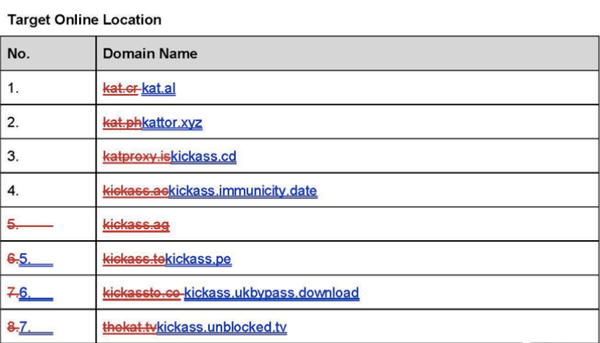 The case (which now has only tenuous links to KickassTorrents) continues alongside the movie industry’s blocking case against The Pirate Bay. That too is experiencing argument over who will pay for what and has also been affected by takedowns.

The Pirate Bay, isoHunt, Torrentz, TorrentHound and Solarmovie are featured in that action, but only the first two domains are intact after last three permanently closed (1,2) in recent months.

Only time will tell whether the expense and inevitable game of whac-a-mole will be worth it, but all the signs point to this being a complex battle with no definite end.