In recent years BitTorrent has been regularly linked to online piracy.

BitTorrent Inc., founded by the protocol’s inventor Bram Cohen, has tried to shake this image, pointing out the many legal implementations and uses of the protocol.

However, it’s hard to ignore that its flagship software uTorrent is regularly used as a pirate tool.

This has previously prompted copyright holders to demand action from BitTorrent Inc., without result, but this week more serious concerns about BitTorrent usage have been brought to the forefront.

New Mexico Attorney General Hector Balderas has launched an investigation into the links between BitTorrent usage and child exploitation. As part of this effort he’s demanding cooperation from BitTorrent Inc., which is made clear in a letter to CEO Ro Choy.

“Protecting New Mexico’s children from horrific sexual violence and exploitation is the number one priority of our Internet Crimes Against Children Task Force, and I am fully expecting BitTorrent’s cooperation with our investigation,” Attorney General Hector Balderas announced.

The AG points out that uTorrent and some of its users are associated with illegal activity, including piracy and child exploitation. The letter also includes a list of search terms, which isn’t published, so the company can track down this content and see for themselves.

“As you may be aware, users of your client software, uTorrent, are known to use your services and software for illegal purposes, including sharing copyright protected material and child pornography and other material that contribute to the exploitation of children and adults in New Mexico,” the letter reads.

In addition to singling out uTorrent, Balderas is also concerned about the CyberGhost VPN, which uTorrent sells in a bundle with the Pro subscription. In particular, because users with criminal intentions can use this to hide their IP-addresses.

“We are also concerned that the ‘Cyber Ghost VPN: be anonymous online’ service offered by uTorrent may pose a high risk of abuse by users seeking to engage in the trade, manufacture, and distribution of child exploitation imagery,” the AG writes.

The letter continues by asking a list of questions through which it hopes to find out more about uTorrent’s users, giving June 8 as a deadline.

Among other things, the Attorney General’s Office (AGO) wants to know how many subscriptions with a VPN uTorrent has sold, what means are used to monitor misuse, and how frequently users are terminated for a violation of uTorrents Terms of Service and End User License agreement. 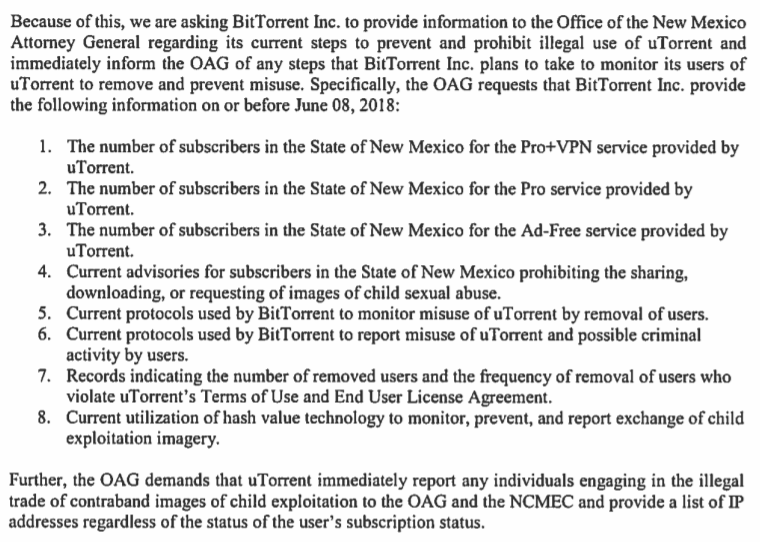 As far as we are aware, BitTorrent Inc. does not monitor users’ download activities, nor have they terminated any subscribers. However, the AG would like to see this happening. The letter specifically asks the company to report users who engage in child abuse.

“Further, the OAG demands that uTorrent immediately report any individuals engaging in the illegal trade of contraband images of child exploitation to the OAG and the NCMEC and provide a list of IP addresses regardless of the status of the user’s subscription status,” concludes the letter.

The AG further urges BitTorrent Inc. to take steps to monitor and prevent illegal use of its software.

As Engadget points out, the letter mentions that other online services use hash filtering tools to prevent the distribution of illegal content, suggesting that uTorrent could do the same.

This brings us back to the copyright complaints we mentioned earlier. Three years ago the RIAA also asked BitTorrent Inc. to block infringing content using hash filtering. While that hasn’t happened, the Attorney General’s investigation makes it a hot topic once again.

BitTorrent Inc informed TorrentFreak that they are currently looking into the matter, reviewing their options.

“We are reviewing recently received correspondence. We cooperate with law enforcement agencies to the full extent of the law,” the company said.