Bing Features Pirated ‘YTS’ Movies and Even Finds Some on YouTube 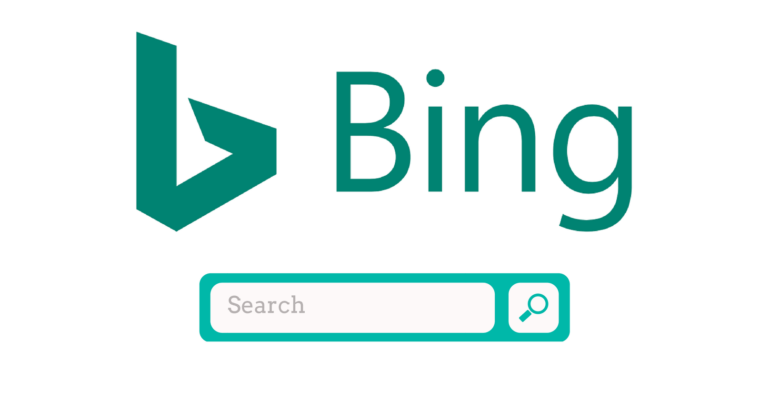 For years, entertainment industry groups have been frustrated by the fact that “infringing sites” show up in search results.

In fact, some see search engines as a fertile breeding ground for new pirates, as they can direct new users to unofficial sites.

Most attention goes out to Google, which is the market leader, but Microsoft’s Bing certainly isn’t ignored. During the first half of 2020, copyright holders asked the search engine to remove over 66 million URLs.

Bing has accepted the majority of these requests, over 99.77% to be precise. The company obviously wants to avoid copyright troubles where it can, but sometimes, its own automated features contradict this mission.

In the past, we have covered how Google’s algorithmic features inadvertently promoted pirate brands, and this week we noticed that there are similar problems at Bing.

When we searched for the term ‘YTS,’ the brand used by one of the largest torrent sites, Bing returned intriguing results. While the most popular YTS site was noticeably absent from the top spot, an eye-catching reel of movie posters showed up. 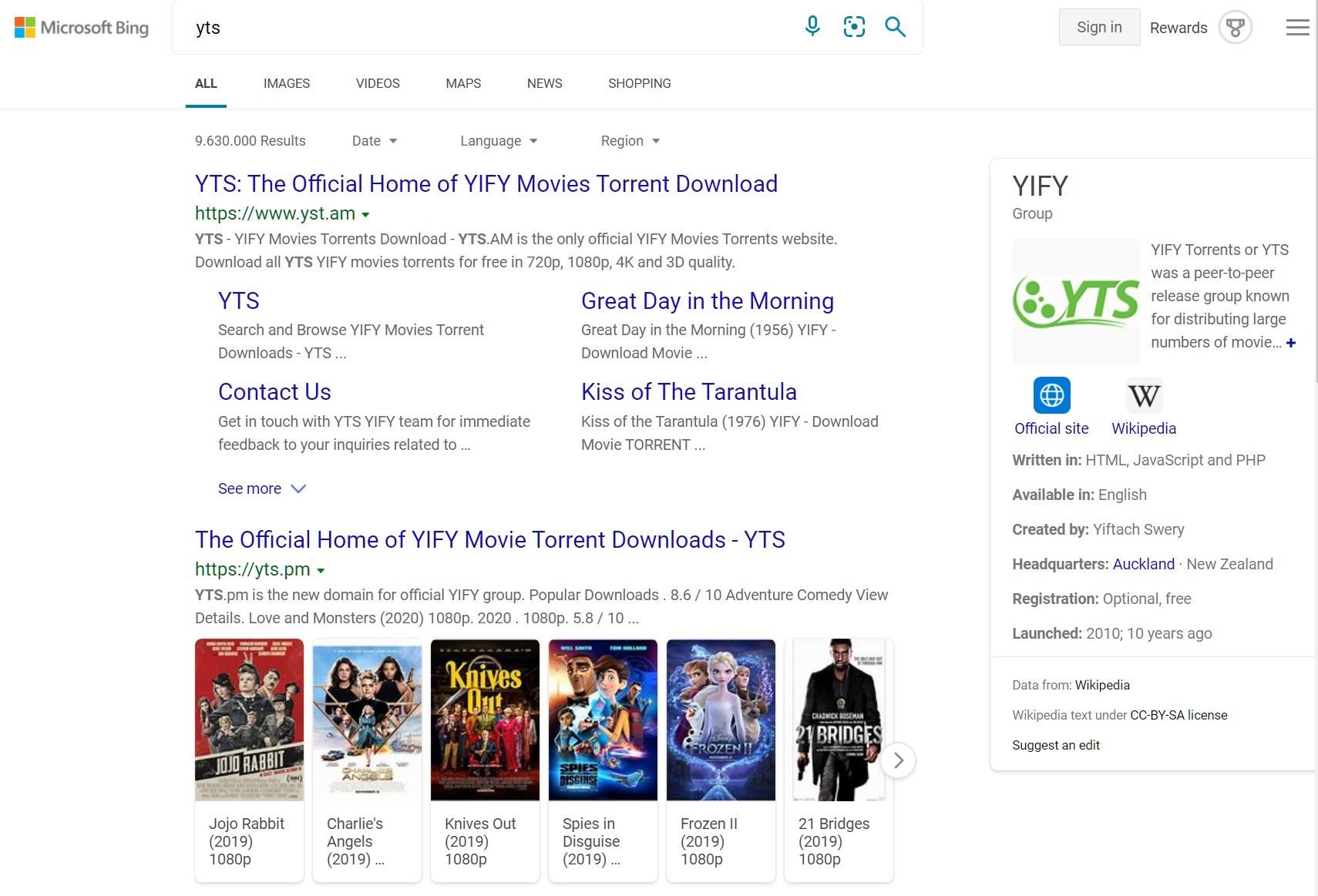 This presentation was also used by Google in the past but was removed after it was picked up in the news. However, where Google never linked the movie posters to torrent sites, Bing does.

Clicking on any of the images featured in the movie reel will lead directly to a YTS site, where people can download the torrent. So one could say that these catchy posters are advertising torrent downloads.

It doesn’t stop there either. When we scroll down -though still on the first page- another movie reel shows up, this time for the more popular and controversial YTS.mx site. Again, the movie posters are linked to the torrent download pages. 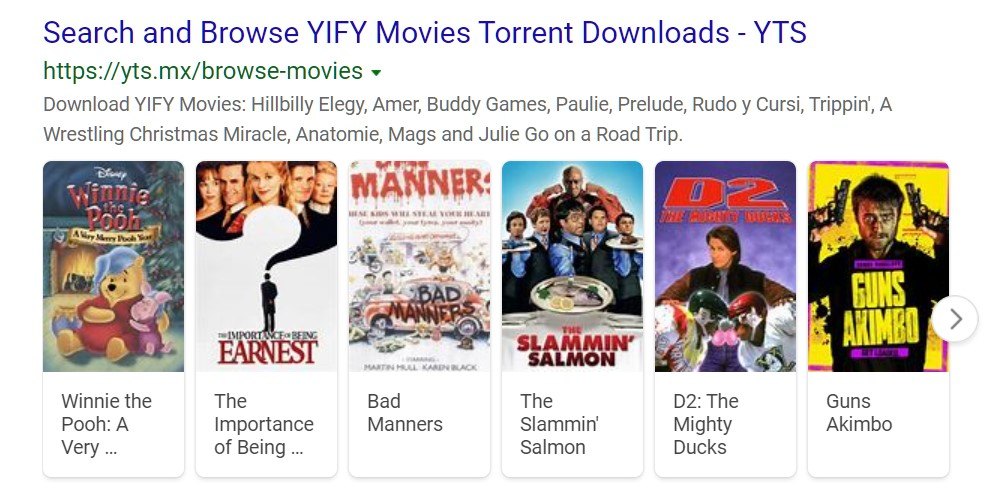 To top it off, Bing also links to a “YTS” video reel, which links to a dedicated video search. That’s quite intriguing as well.

YTS Releases on YouTube, the Internet Archive, and More

The video results don’t show any torrents, since these can’t be streamed from most sites, but a search for YTS movies does link to pirated movies on YouTube and the Internet Archive.

These are not the dreaded fake videos that are floating around, but actual full-length pirated films. 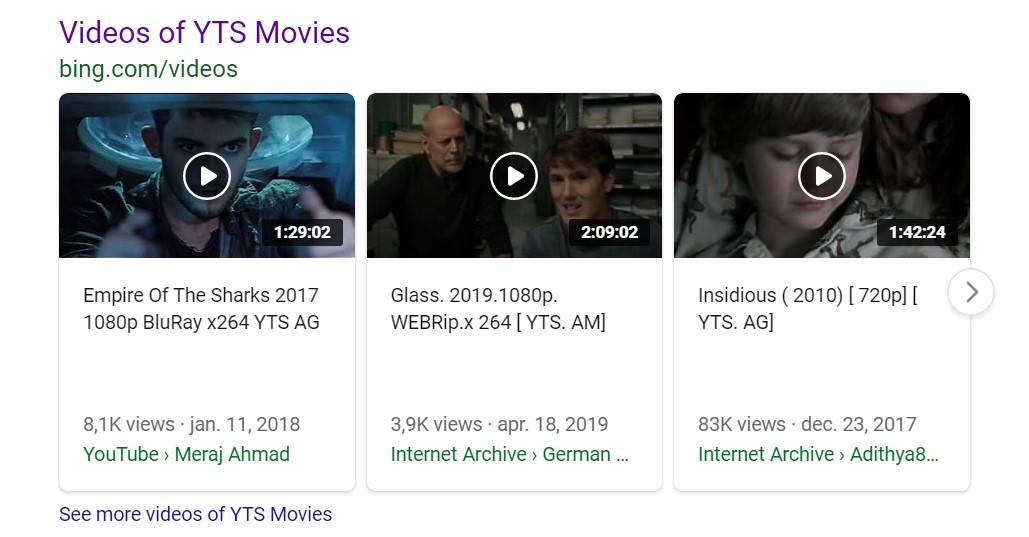 Bing can’t really be blamed for that of course, but the difference to Google is striking. Where Bing shows links to pirated movies, Google features videos that show people how to download from YTS. We’re not really sure which one is better, or worse.

In summary, we could say that Bing offers exactly what users want. But whether copyright holders will be happy with that is doubtful.

It wouldn’t be a surprise if the search engine follows in Google’s footsteps and removes the feature in the near future. Just like many popular pirate sites are slowly vanishing from the top search results.