It’s been more than five years since the RIAA stopped its controversial legal campaign against individuals, an effort which resulted in thousands of private settlements with accused file-sharers.

In recent months, however, the music industry has shown renewed interest in extracting payments from pirates. In a scheme pioneered by the Santa Monica based firm Rightscorp, several major rightsholders are targeting alleged BitTorrent pirates.

After the company went public last year, this number has been expanding steadily. Rightscorp now says it protects over 1,000,000 copyrights which includes 13 tracks from the most recent Billboard Hot 100.

“We are pleased to announce that we are monitoring and protecting 13 songs on the current Billboard Hot 100,” Rightscorp says.

In common with other works they are protecting, Rightscorp sends settlement requests to U.S. ISPs who are asked to forward them to subscribers. In addition to commercial ISPs, this also includes universities and all other companies that have IP-addresses registered in their name.

“We can confirm that we send notices to every ISP with a registered block of IP-addresses. This includes universities and corporations,” Rightscorp CEO Christopher Sabec told TF.

Thus far the company has received settlements from subscribers of more than 50 ISPs across the country. In the near future it hopes to add more copyright holders to its client base to increase this number.

“We are in discussions with content creators and rights holders of additional copyrighted property including many other tracks in the Hot 100 as the entertainment industry places more value on our unique service,” Rightscorp notes.

Internet users who are caught don’t face bankruptcy, as the settlement demands are usually around $20 per pirated file. The costs can increase quickly though, as an album of 14 tracks results in separate settlement offers for each song.

Below is an example of a notice Charter forwarded to one of its subscribers. It lists John Mayer’s track “Wildfire” from the album “Paradise Valley,” and warns that the recipient may be liable for hundreds of thousands of dollars, unless he or she settles.

“Your ISP account has been used to download, upload or offer for upload copyrighted content in a manner that infringes on the rights of the copyright owner. Your ISP service could be suspended if this matter is not resolved. You could be liable for up to $150,000 per infringement in civil penalties,” the email warns. 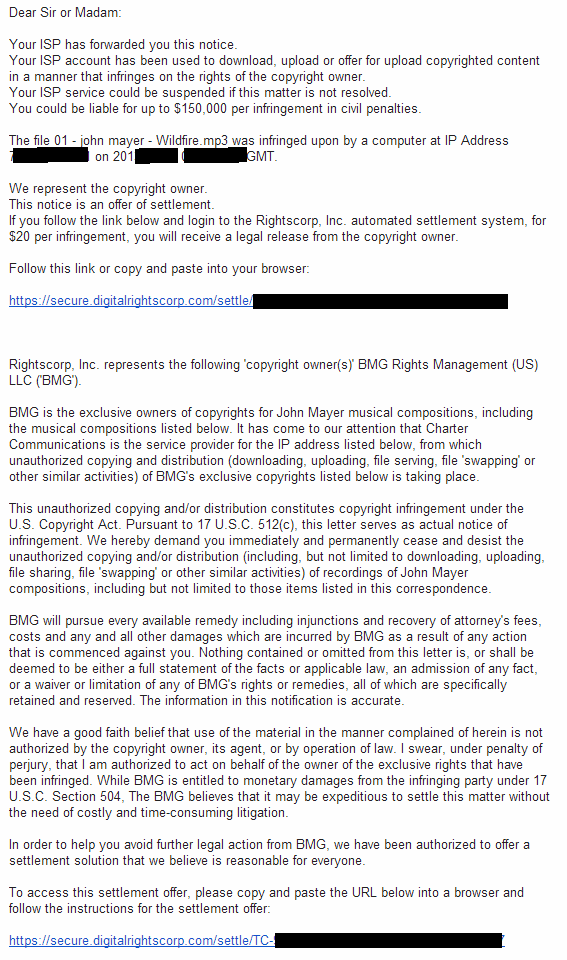 Interestingly, John Mayer and his label are not involved in the matter in any way. Instead, the settlement request was sent on behalf of BMG, who bought Bug Music, which has one of the co-writers of Wildfire under contract, as Rightscorp explained to us.

The above brings up an important issue regarding the settlements. Since most copyrighted works have several stakeholders, a settlement with one party doesn’t automatically mean that other interested parties are barred from also seeking settlement. In the example shown above, Sony Music or John Mayer could still sue for the infringement that was settled with BMG.

While many ISPs kindly forward the settlement requests, not all do. Comcast for example, only appears to forward the infringement details and not the part about the settlement. This means Rightscorp’s scheme doesn’t work with the country’s largest ISP.

However, that doesn’t stop Rightscorp from stepping up its efforts. According to the company their system is much more effective than the voluntary “copyright alerts” and with millions of dollars rolling in, they are not expected to change course anytime soon.