The Frostwire client, which can be used in the same way as uTorrent or Vuze for example, now includes a torrent creation feature which supports Bitcoin, Litecoin, Dogecoin and PayPal donations.

Once a torrent is created and loaded into FrostWire, downloaders are given a new set of icons indicating which crypto-currency donation options are programmed into the release.

Clicking any of these takes the downloader to a custom donation page, meaning that there is a direct connection between a torrent and a monetization option, something that has been absent from torrents since their creation well over a decade ago.

Although software and a music single were used as a demo for the tipping system, no band had taken the plunge and used it for one of their albums. A month later and hip hop band Ain’t No Love have made history, becoming the first ever band to offer a full album for free on BitTorrent, using an integrated Bitcoin tipping mechanism. 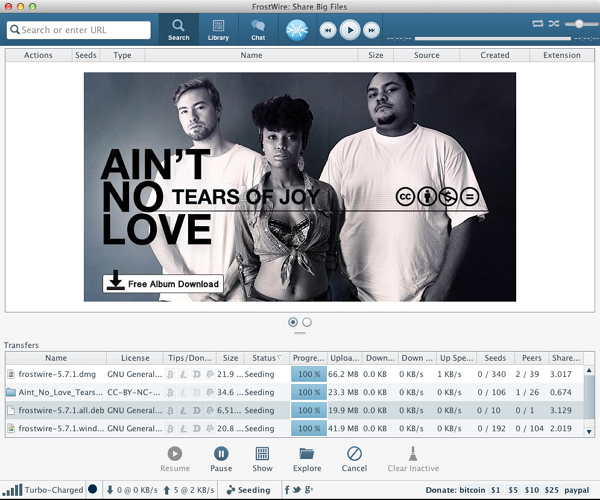 “Using Bitcoin has definitely widened our reach to people who don’t necessarily listen to our type of music, but like that we get down with Bitcoin, and started listening to our music, which is a cool thing in itself,” says lead singer Saidah Conrad.

Having worked hard on a Bitcoin implementation, FrostWire say they are pleased to welcome the band on board.

“Ain’t No Love’s Tears of Joy comes to FrostWire during a very special time – as a first ever .torrent album to support crypto-currency donations such as Bitcoin, Litecoin, and Dogecoin (as well as the more traditional PayPal),” the company said.

“So if you love the band just as much as we do, be sure to check them out on Facebook, share the video, spread the news on Twitter or simply show some support by giving a little tip, whatever you can, any way you can.”

The other neat thing is that all donations go directly to the band as there is no middleman, and FrostWire is promising to keep it that way forever.

The torrent for Ain’t No Love’s Tears of Joy can be downloaded here.