In recent years blockades of “pirate” websites have spread across Europe and elsewhere. In the UK, for example, more than 30 websites are currently blocked by the major ISPs per court order.

Opponents of this censorship route often warn that the measures inhibit free speech and risk overblocking. However, music industry group IFPI disagrees, pointing out that the rights of creators to protect their work trump these concerns.

“Despite misrepresentation by some anti-copyright campaigners, courts have consistently found that the blocking of sites providing illegal content achieves an appropriate balance of fundamental rights,” IFPI writes in its latest Digital Music Report.

IFPI points out that the ISP blockades in several European countries are having effect. Drawing on information supplied by data intelligence firms comScore and Nielsen, they report that “BitTorrent usage” decreased 11 percent in countries where pirate sites are censored, while it increased elsewhere. 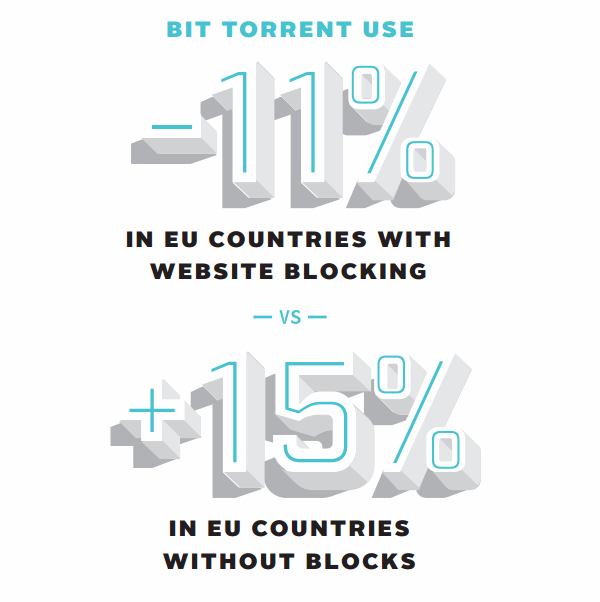 The data further shows that this blockade effect is most pronounced in Italy and the UK, where the most torrent sites are blocked. In Italy BitTorrent traffic dropped 13 percent and in the UK the decline was even larger, 20 percent.

The report doesn’t make it clear whether actual BitTorrent traffic was measured, or only page views at popular torrent sites. Regardless, IFPI notes that there’s still plenty of work to be done.

“The industry believes that website blocking is an effective tool to help tackle digital piracy and should be available in more countries worldwide. It also needs to be extended to cover mobile networks,” IFPI reports.

The music industry group doesn’t name any countries, but perhaps they are hinting at the RIAA to push for “voluntary” blockades in the United States. In any case, if it’s up to IFPI the number of ISP blockades around the world will continue to increase.

The results reported by IFPI run contrary to a decision from the Dutch Court of Appeals earlier this year, which concluded that the Pirate Bay blockade was “disproportionate and ineffective.” As a result, Dutch ISPs were allowed to lift the access restrictions.