BitTorrent Inc. Goes Social, But At What Cost?

BitTorrent Inc’s developers have come up with numerous new features for their two BitTorrent clients in the last year. Both uTorrent and BitTorrent mainline have expanded their functionality, and the latter client also got a complete redesign to set it apart from its big brother uTorrent.

The BitTorrent mainline beta version, codenamed Chrysalis, debuted its new design in March. With a different, less complicated look, it was built to appeal to BitTorrent novices who otherwise might stop using the software.

Yesterday, the BitTorrent mainline client added another major feature that is supposed to appeal to a broad audience – personal content channels. In the latest beta users are now able to create channels where they can share content with a selected group of friends.

The new feature basically creates a small social network inside the BitTorrent client where people can share files no matter what the size is, something that’s not possible with existing social networks.

“Until recently, most of your personal files were small enough to email or post to social networks. Now, it’s really easy to shoot HD video with your smartphone or snap high-res photos from a digital SLR. What happens to these giant files? They sit orphaned on your computer, or over-edited to make them small enough to share,” BitTorrent’s CEO Eric Klinker explains.

“BitTorrent removes the size barrier and makes it simple for you to openly share your creations,” Klinker adds. 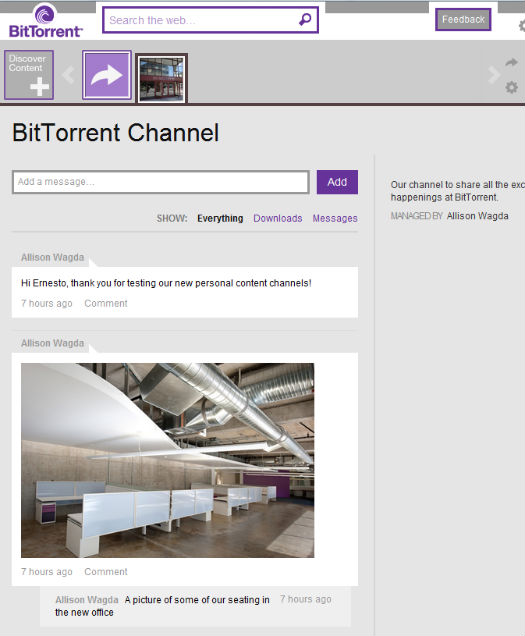 According to BitTorrent protocol inventor Bram Cohen, the new addition is a perfect match for the client. “BitTorrent’s distributed technology was built to accelerate the transfer of large files,” he says.

“Personal content channels are an ideal use case given the asymmetric nature of bandwidth and the costs of file hosting. The more friends you add to a channel, the faster your files will download. This is an emerging market and we’re excited to see the technology solve modern Internet challenges,” Cohen adds.

Although it will be hard to convince the hardcore BitTorrent users to adopt it, we can see the purpose of the personal content channels from a novice perspective. Setting up a channel only takes a few clicks and is pretty much dummy-proof, so in that regard the developers have done a great job.

That said, the announcement also came with the suggestion that these channels will not be completely free in the future, and that might be less appealing to most users. BitTorrent Inc. told TorrentFreak that they’re not sure what the cost will be, if there will be any at all, but that they’re keeping it open as an option.

The same is true for bringing these personal content channels to uTorrent. Right now they are only implemented in the BitTorrent mainline client, but this may change in the future.

“We’ll see how the channels work for the BitTorrent community and if it’s popular and makes sense, we’ll take a look at the idea. In that case, it would be implemented in a way that considers the needs and priorities of the uTorrent community,” TorrentFreak was told.

The last ‘cost’ we feel we have to highlight is privacy. Large files shared in ‘private’ personal content channels are in theory not easy to discover by others, but since they use DHT, there are some specialized search engines that may pick them up.

In other words, don’t share anything the rest of the Internet isn’t supposed to see. Once it’s posted on BitTorrent, there is no central place to take it down either, if other people are still seeding the file. Bottom line is, be cautious while sharing.

It’ll be interesting to see how the personal content channels will be picked up by the public and what changes will come along with them. If anything, BitTorrent Inc. can’t be blamed for not trying to innovate, which is gutsy in the generally change resistant BitTorrent community. Time will tell whether they’re right in doing so or not.

The latest BitTorrent beta is available here, and more info on how to get started can be found at the BitTorrent blog.