Ipoque, a German based company that specializes in developing bandwidth managing solutions for universities and ISPs has just released its 2008/2009 Internet traffic report. In total, over 1.3 petabytes of Internet traffic from several continents was analyzed.

The report concludes that the proportion of P2P traffic is slightly declining, while file hosting services and streaming websites show an increase. Most P2P users come from Eastern Europe, where 57% of all Internet traffic comes from BitTorrent users.

Southern America has the least BitTorrent traffic at just 20% of total, with the filesharing application Ares continuing to dominate with 28%.

P2P traffic vs. the rest 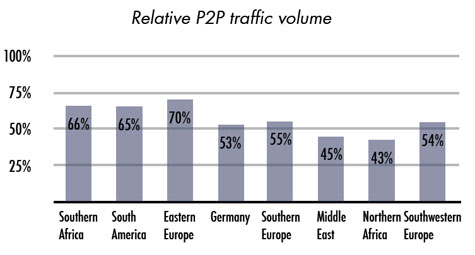 The data further shows that BitTorrent’s market-share of P2P traffic is still increasing. In Southwestern Europe it went up by 45% in 2008, in Eastern Europe by 23% and the proportion of BitTorrent traffic increased by 40% in the Middle East. 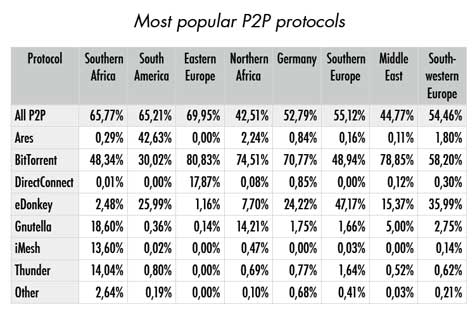 Interestingly, the report shows that approximately one quarter of all BitTorrent traffic uses protocol header encryption. Encryption doesn’t have any privacy advantages, but aims to hide the fact one is using BitTorrent, which makes it harder for ISPs to throttle their subscribers.

Overall we can conclude that BitTorrent has grown significantly over the past year while eDonkey took the biggest hit. Percentage-wise, P2P traffic is declining, but this is due to the increase of streaming and file-hosting services rather than a decreased interest in P2P.