The latest order was issued last month after a complaint from the major record labels. It expands the UK blocklist by 21 torrent sites, including limetorrents.com, nowtorrents.com, picktorrent.com, seedpeer.me and torlock.com.

This weekend both BT and Sky implemented the new changes, making it harder for their subscribers to reach these sites. Interestingly, however, BT appears to have gone above and beyond the court order, limiting access to various other sites as well.

Over the past several days TorrentFreak has received reports from several users of private torrent sites who get an “error blocked” message instead of their favorite sites. These include the popular IPTorrents.com and TorrentDay.com trackers, as well as scene release site Scnsrc.me.

IPTorrents and Torrentday are significant targets. Although both sites require prospective users to obtain an invite from a current member (or from the site itself in exchange for cash), they have over a hundred thousand active users.

The error displayed when BT subscribers try to access the above URLs is similar to that returned when users to try access sites covered by High Court injunctions.

However, there is no known court decision that requires BT to block these URLs. In fact, no UK ISP has ever blocked a private torrent site before.

TF contacted BT’s press contact and customer service team but we have yet to receive a response to our findings. Meanwhile, several of the affected users are discussing on Facebook and Twitter how they can bypass the blockades. 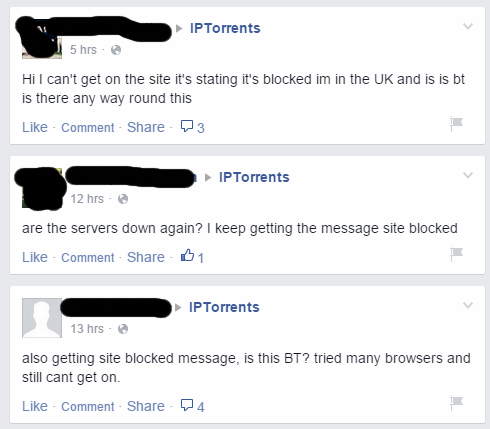 It appears that for now IPTorrents is still accessible via https and via the site’s alternative .me and .ru domains. In addition, VPNs and proxy servers are often cited among suggested workaround techniques.

Whether the private torrent sites will remain blocked and on what grounds remains a mystery for now. We will update this article if BT sends us a response. BT users who spot more unusual blocks are encouraged to get in touch.

Update: The blocked sites are part of a new High Court order that includes 32 sites in total.