Canadian Democrats are Pro BitTorrent and Against Throttling 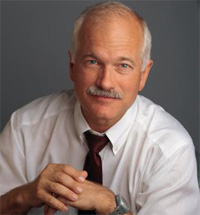 Jack Layton, leader of the Canadian New Democrats is a proponent of net-neutrality, and he believes that social networking sites, YouTube and torrent sites are great services that should be available to everyone.

In a direct message to our friends at p2pnet Layton stated: “Torrent sites […] are actually very fundamental to making a democracy work, and to helping human intelligence to be shared and exchanged. It’s about as fundamentally democratic as you can get.”

In the video message Layton is very clear. Throttling people’s connections is not an option. The Internet should be open and equal to everyone.

“What we want to see is the Internet used as a public tool — a public tool for exchanging ideas and I particularly want to say that if we don’t fight to preserve it, we could lose it. We don’t want to see hidden fees and gouging and service slow-downs all in the interests of promoting the objectives of certain large corporations,” Layton says in his message to P2Pnet.

With his statement, he joins his fellow party member Charles Angus, who has spoken out against against ‘anti-piracy bills’ and in favor of Net-neutrality many times before. In an interview last June, for example, he said that the proposed three-strikes law is idiotic, and completely useless.

“It’s idiotic because as we see with the DMCA those that get accused of infringements lack the legal power that the corporations that are threatening them have,” Angus said. “So it’s always going to be a completely one-sided argument and if ISP’s are legally bound to cut you off after three claims of infringement, I think there are certainly problems.”

Based on their views on net-neutrality and copyright bills, the New Democrats seem to be the best party to vote for. Much better than the Conservatives at least, who are supporting ACTA and bill C-61. Unfortunately, many Canadians are planning to vote for the Conservative, as they are awfully close to a majority. This triggered isoHunt’s founder Gary Fung, who’s from Canada as well, to encourage his Canadian users not to vote for them.

On the frontpage of isoHunt Gary writes: “I know about 3.7 million Canadians visited isoHunt last month, which is more than 10% of Canada’s population. So I ask all who read this to tell your Canadian friends to not be a slacker and vote on Oct. 14. I don’t care which party you vote, just vote any party but the Conservatives.” In addition to this statement, all Canadian isoHunt visitors will now see the following message on top of the page, which leads them to Gary’s statement.

The New Democrats seem to be a good alternative to the Conservative party. However, towards the end of the video message Layton scared us a little by saying: “The Internet belongs to Canadians,” but we’re pretty sure he is trying to say that all Canadians should have equal access to the web.