Inspired by these revelations the Canadian Pirate Party decided to take a look at the downloading habits of their local Government and police, against a backdrop of vigorous recent debate surrounding online piracy in Canada, and the copyright troll phenomenon in particular.

With help from the pirating anti-piracy group Canipre several movie studios are gearing up to sue thousands of Internet subscribers. Interestingly, the Pirate Party’s findings suggest that even the Royal Canadian Mounted Police (RCMP) and the Government’s Industry Canada could become potential targets.

“This discovery shows that copyrighted materials have, in fact, been downloaded via the RCMP and Industry Canada networks,” states Pirate Party leader Travis McCrea.

McCrea notes, however, that like most copyright trolls, their evidence is far from rock solid and can’t be linked to individual downloaders.

“However, we cannot be sure who is responsible for downloading the material, or even if it was downloaded by employees, contractors, or a person who was using an open wireless connection. This is why this type of intellectual property enforcement doesn’t work – there is no method of reliably telling who actually engaged in the infringement of copyrighted materials.”

Below are a few “hits” that were found with data provided by BitTorrent tracking outfit Scaneye, starting with the police IP-addresses. The pirated titles are not unusual and the list mostly includes popular TV-shows and movies. 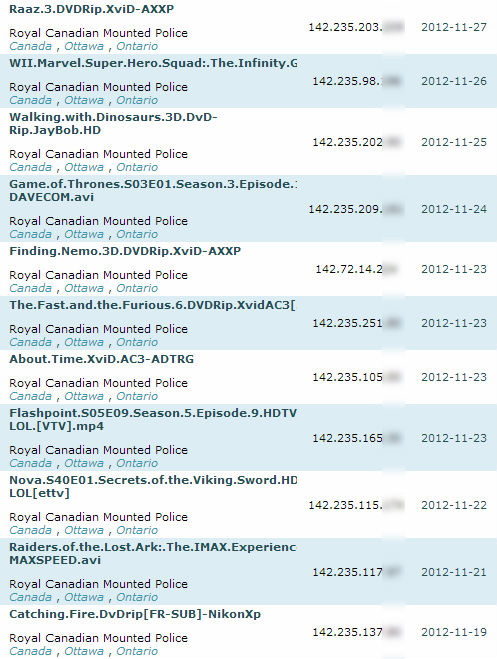 Industry Canada IP-addresses have also been caught pirating movies TV-shows and games, including episodes of The Voice, Duck Dynasty and The Ultimate Fighter.

The IP-addresses that were found are pulled from peer lists which increases the possibility of false positives, which is exactly how many copyright trolls are believed to gather evidence. 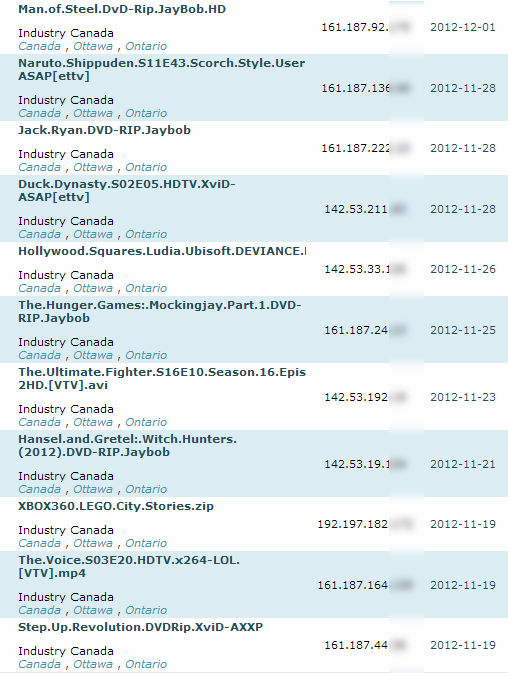 In the months to come thousands of Internet subscribers may be dragged to court, with movie studios demanding thousands of dollars in compensation. The Pirate Party Canada speaks out fiercely against these trolling actions.

They point out that despite the crackdowns on individual citizens, the police and the Government can seemingly continue to pirate without repercussions.

The fact that the makers of Game of Thrones and other frequently pirated titles don’t seem to mind, makes it all the more confusing according to the Pirate Party.

“Between the difficulty of targeting individual pirates, the double standard of targeting individuals more harshly than organizations, and the fact that many content creators don’t see piracy as detrimental to their business, it’s clear that something is wrong with the way intellectual property rights are currently enforced,” the Party comments.

“If the goal of copyright enforcers – and the creators they represent – is to increase profits and protect creator rights, shouldn’t there be a better way to accomplish this than by harassing individuals who may or may not bear any responsibility for copyright infringement happening on their IP address?”

For the many future troll victims in Canada, we hope that the judges handling these cases will ask the same questions.