RapidShare Fires 75% of its Staff After “Rogue Site” Revamp Bites

After its launch in 2004, RapidShare’s speedy growth saw the company become one the largest file-hosting sites on the Internet.

However, like all sites of this nature, RapidShare became popular with those looking to store copyright-infringing material. It was a relationship that would prove problematic.

RapidShare fought many legal battles with entertainment companies seeking to hold the company liable for the actions of its users, but it was a big surprise three years ago that really caused it to take stock.

In 2010, the RIAA submitted their list of foreign “notorious markets” to the Office of the US Trade Representative and among the usual torrent site suspects were RapidShare. In the year that followed the company spent huge amounts of cash – reports suggest around 500,000 euros – lobbying to change the site’s image and convince entertainment companies that it was serious about protecting their copyrights.

In the short-term at least the strategy appeared to pay off. RapidShare were absent from the USTR’s 2011 list, a sign that entertainment companies felt they had the file-hoster reasonably contained and on the right track. In the months that followed, particularly following the shutdown of Megaupload, RapidShare made further adjustments to its business plan, publishing a controversial “anti-piracy manifesto” and taking increasingly harsh measures to deter file-sharers. As a result, traffic plummeted. 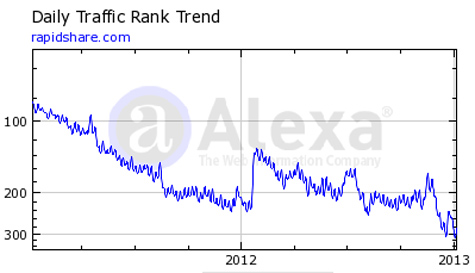 As can be seen from the chart above, not even a temporary boost in traffic following the 2012 shutdown of Megaupload could disrupt the downward trend for long. RapidShare’s actions caused a continual reduction in traffic from its heyday in 2010 (50th most popular site in the world) but the worst was yet to come. 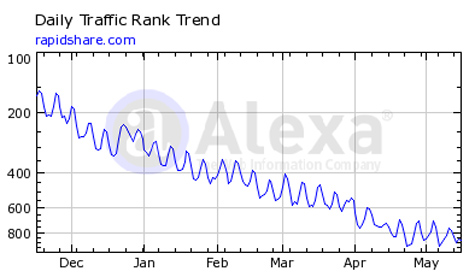 The effect on the company has been dramatic. According to an insider who spoke with Swiss news site 20Minuten, RapidShare has been forced to fire 45 employees – 75% of its workforce – even after assuring them late last year that their jobs were safe. Of particular concern is that only a few weeks ago the company was still hiring fresh staff from abroad. They will be told to leave in seven days, the insider reports.

“The employees themselves, no matter who you ask, do not believe in the survival of the company,” the source said.

According to the source, late last year then CEO Alexandra Zwingli announced a “strict austerity program” for the company. Zwingli was subsequently replaced by Kurt Sidler, the former head of business software company Sage.

20Minuten confirmed the departures with RapidShare.

“The situation is undeniably so that we can reduce costs and unfortunately we have to part with a number of employees,” said Sidler. “RapidShare is maintained and the operation has concrete plans for the future.”

With RapidShare having publicly turned its back on the very community that made it rich over the years, never again will the site be able to return to the business model that once elevated it to elite status on the Internet. The appointment of Sidler, who says his job is to “align RapidShare with customer needs and requirements”, suggests the company will now move in a very different direction.