The major entertainment industry companies are waging a war against illicit streaming devices, with Kodi add-ons at the center of attention.

The Kodi software itself is perfectly legal, but many third-party add-ons complement it to offer access to pirated movies, TV-shows, and live-streaming.

The addons in question can be found of a variety of sites and repositories. Some are blatantly offering pirated content, but it’s not always clear what’s permitted and what’s not.

TVAddons, a popular repository of third-party Kodi addons, used to offer many problematic add-ons. This lead to lawsuits in both the US and Canada, after which the company cleaned up its site and tightened its policies.

However, that doesn’t mean that rightsholders are happy with all content on the site. This week CBS sent a takedown notice to TVAddons through Incorporate Now, requesting the site to remove three allegedly infringing addons.

The addons in question, developed by mhancoc7, offered access to live streams of CBS programming such as CBS News, CBS Sports, and Entertainment Tonight, without permission.

One of the CBS Addons 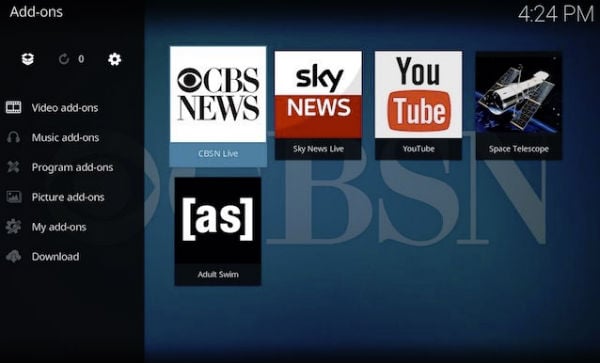 “We have a good faith belief that this material is not authorized by CBS, its agents or the law. Such copying and use of this material constitutes clear infringement of the CBS’s copyrights under the Copyright Act and its counterpart laws around the world,” the takedown notice reads.

In addition, CBS also requested to count the infringements as strikes under TVAddons’ repeat infringer policy, and disable the developer’s account if appropriate. 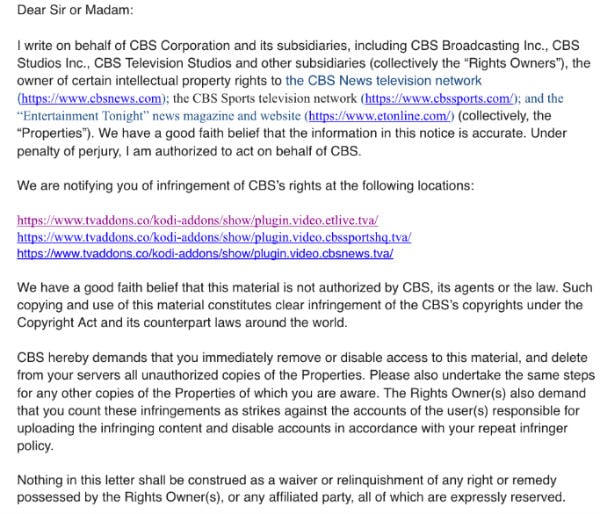 While TVAddons says that it doesn’t see the addons in question as infringing, it doesn’t want to pick a fight with CBS, so it complied with the removal request within an hour. Striking the developer goes a step too far though, TVAddons informed CBS.

“However, do not feel that this merits any strikes on our repeat-infringer policy, as it was not copyright infringement. The script was simply scraping content from your own public web site,” a TVAddons representative replied.

TorrentFreak spoke to a TVAddons representative who notes that the add-ons accessed content that was made freely available by CBS through its official website. Therefore they don’t see it as infringing.

“The only difference is that the user wouldn’t be exposed to 50 nonconsensual privacy violating trackers while using Kodi,” the TVAddons representative says.

Whether these kinds of addons are copyright infringing is up to a court to decide. We expect that CBS wants to control where their content appears. Ideally, that’s through their official website, where they can monetize it.

TVAddons has enough legal worries already, so it chose to comply despite its objections. The developer also removed the addons from GitHub.

“We can’t afford to fight more lawsuits right now, so we had no choice but to comply even though we don’t necessarily agree with their assessment that it’s copyright infringement. It’s at most a trademark violation for using the CBS name in the add-on title,” TVAddons’ representative notes.

This is the second takedown notice which resulted in add-ons being removed after the site relaunched two years ago. The first complaint came from Plex, which requested the removal of  MK Plex, an unofficial Plex interface.