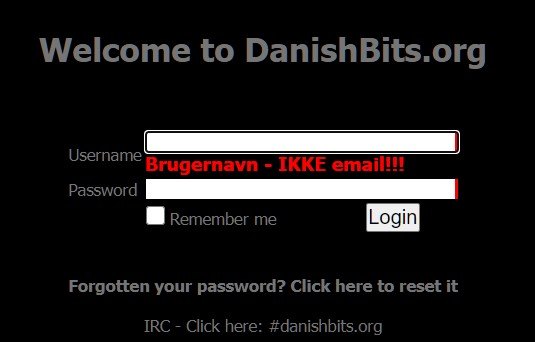 After establishing itself as one of the leading private torrent trackers on the web with millions of visits per month, it was only a matter of time before DanishBits attracted the attentions of the authorities.

Indeed, Danish anti-piracy group Rights Alliance quietly reported the site to local police as far back as 2016 but although the wheels of enforcement can move slowly, during the last quarter of 2020 significant progress towards dismantling the operation was made public.

During October 2020, DanishBits – which was extremely popular in its home territory – suddenly became unreachable. A source close to the site informed TorrentFreak that one of the site’s owners had been arrested earlier in the month, with the downtime attributed to that person’s predicament.

By December 2020, the situation surrounding DanishBits was becoming more clear. Denmark’s State Prosecutor for Serious Economic Crime (SØIK) revealed that a 33-year-old Danish man had been arrested in Morocco, following an investigation prompted by a formal complaint from local piracy group Rights Alliance.

The still-unnamed individual, who was labeled as the alleged DanishBits ringleader, was temporarily jailed in Morocco, pending an extradition process aimed at returning him to Denmark to face trial.

Kim Dotcom, for example, is still fighting extradition in New Zealand nine years after his original arrest. George Bridi, allegedly a former key player in the SPARKS release group, is believed to be still in Cyprus awaiting extradition to the United States after being arrested last August. For the alleged operator of DanishBits, however, things have moved much more quickly.

According to a new announcement from Special prosecutor Dorte Frandsen at SØIK, the 33-year-old ‘ringleader’ of DanishBits is now back on Danish soil after a successful extradition process. During a hearing at the Copenhagen City Court last Thursday, he was remanded in custody for 25 days.

“We consider the 33-year-old as the mastermind of an extensive file-sharing network,” Frandsen says.

“The case is still being investigated, and one should not think that one can hide abroad and thus avoid being brought to justice. International co-operation works, and there is a risk of being imprisoned for a long time abroad.”

In response to the development, Rights Alliance Director Maria Fredenslund welcomes the efficiency of the SØIK Intellectual Property Rights Taskforce in returning the defendant to Denmark to face trial.

“It is enormously satisfying for the rights holders to experience how SØIK strikes against Danish suspects both inside and outside Europe. It sends a clear signal that the criminals cannot hide – not even outside Denmark’s borders,” Fredenslund says.

“It is really an excellent effort from both SØIK, the National Cyber ​​Crime Center (NC3) of the National Police, and from the police authorities of the other countries involved.”

NordicBits: No Extradition Due to Sombre Circumstances

Back in 2018, Rights Alliance also reported another private tracker to the authorities. Albeit with a lower member count of around 5,000, NordicBits was still considered a player in the region and a 69-year-old man was ultimately identified by the authorities as its operator. Following action by SØIK, he was questioned and charged by police in Spain last September.

“He admitted to being behind the scenes and then helped to close the file-sharing service,” SØIK adds, confirming earlier reports.

“This put an immediate stop to the illegal sharing. The accused person was seriously ill at the time of the charge and subsequently passed away before the case came to court.”

Both Sites Were Operated Professionally

SØIK says that according to its investigation, carried out in conjunction with the National Police’s National Cyber ​​Crime Center (NC3) and police authorities in other countries, both DanishBits and NordicBits were professionally operated.

“[B]oth the administrators and the users made great efforts and were very aware of to hide their true identity – for example, by paying with cryptocurrency,” SØIK notes.

But while DanishBits and NordicBits have already been consigned to history, the war against file-sharing sites in Denmark is ongoing.

Two other sites – Asgaard and ShareUniversity – previously opened their doors to new members following the closure of the shuttered sites. However, their enthusiasm to take up the slack was cut off in its prime following threats from Rights Alliance, leading to both shutting down prematurely and further arrests.

Rights Alliance has been making its position clear for some time – new entrants to the file-sharing market will not be tolerated. SØIK says that there is more work to be done.

“The investigation of file-sharing cases continues by SØIK’s special IPR unit (Intellectual Property Rights), which is a national unit that investigates and prosecutes violations of the Trademark Act, the Copyright Act, the Design Act, the Patents Act and the Radio and Television Act,” the agency concludes.