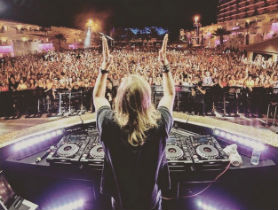 In recent years numerous studies have shown that music pirates spend more money on legal purchases, including concert tickets and merchandise, compared to their non-sharing counterparts.

There are exceptions to this rule, but it’s hard to deny that there are plenty of pirates among the music industry’s most loyal customers.

This positive outlook on the piracy phenomenon is also shared by one the world’s top DJs, Frenchman David Guetta. In a recent interview with the BBC he suggests that unauthorized file-sharing actually helps to bring people to his concerts.

“I just want people to have access to my music. If there was no piracy, why can I sell out 20,000 people every in Brazil?” Guetta says.

“Is it because of how many records we sold in the shops? Of course not.”

The Frenchman, who previously opted to give music away for free to solve the piracy issue, doesn’t mind getting paid of course. In an ideal world every listener would pay something, but this isn’t a very realistic option.

Piracy is here to stay, so musicians better make use of it and enjoy the benefits it has to offer.

“I wish that every person who’s listening to my music would send me a little check. That would make me a very rich person, that would be wonderful. But at the same time this is impossible,” Guetta says.

“You can’t fight progress, so you better embrace it,” he adds.

With a net worth estimated at dozens of millions it’s easy talk for the financially independent Frenchman. Smaller artists, however, may be more worried when they see their work being pirated.

Still, the point Guetta makes is universal. Piracy often serves as promotion for artists who can grow their user-base at a rapid pace and earn more revenue through live performances and merchandise.

Like most other artists Guetta wants as many people as possible to hear his music. If this means that some will take it without paying directly, that’s still better than not being heard at all.