These studies help the public to understand local piracy trends and can be used as input for future policy decisions.

Most recently, EUIPO published a study (pdf) that looks at the role of social media in relation to counterfeiting and piracy. The researchers used both quantitative and qualitative analysis to review millions of conversations on Facebook, Twitter, Instagram, and Reddit.

The goal of the study was to gain more insight into how frequently these platforms are used by infringers. This resulted in some intriguing observations and we will highlight several piracy-related findings.

Starting off, it’s good to know that the research is limited to public discussions only. Also, in large part it relied on automated filters to determine whether a discussion is related to piracy. While there were some manual checks, this automated process leaves room for errors.

After analyzing millions of discussions, the researchers conclude that 35 % of all conversations on digital content could be ‘possibly’ related to piracy. The ‘possibly’ refers to the potential inaccuracy of the automated process, but it’s nonetheless a very large percentage.

The researchers provide several examples of piracy-related posts which can range from tips on how to download content from YouTube to posting direct links to pirated movies or TV-shows.

To obtain a more detailed look at how social media is used, the researchers also broke down the discussions per content category and platform. This shows that Reddit played a “very important role” as more than half of all piracy discussions took place there. 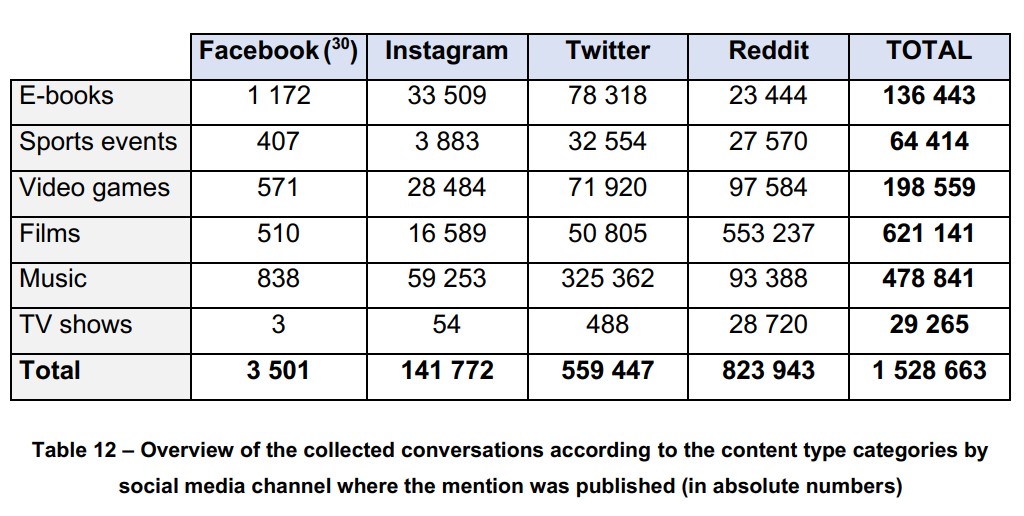 “Regarding the overall use of social media channels in terms of the volume of digital piracy-related conversations, it was observed that Reddit was the most used channel, followed by Twitter,” the EUIPO report notes.

Despite its massive user base, Facebook’s role is relatively small. This may in part be explained by the fact that many Facebook discussions are not shared publicly.

Not All Pirates Prefer the Same Platforms

In absolute numbers, film and music piracy are most discussed. Interestingly, however, e-book pirates are relatively active on Instagram and music pirates tend to favor Twitter. Film and TV piracy, on the other hand, are almost exclusively mentioned on Reddit. This is also reflected in the table below.

There is no clear explanation for these differing preferences. However, some social media platforms lend themselves better to certain types of copyright infringement than others.

“According to the results, Instagram is the preferred channel for IPR infringement of physical products, which can be explained by the very visual nature of the platform, therefore making it more appealing as a virtual showroom and more effective in promoting physical products,” the report reads.

“In contrast, conversations about digital content mainly take place on Twitter and Reddit, as they offer short and direct messages accompanied by links that seem to better fit IPR infringement-related conversations for these content types.”

The research was conducted between July 2017 and June 2020, which includes the beginning of the coronavirus pandemic. According to the report, there was a notable increase in piracy-related discussions during the start of the pandemic, but the volume returned to normal levels in the summer.

Overall, findings show that social media certainly plays a role in the piracy ecosystem. The downside of the research is that it’s limited to public discussions from Germany, Spain, France, Italy, Poland and Sweden. In addition, distinguishing between illegal and legal content is a challenge.

That said, it’s intriguing to see how different types of pirates flock to different platforms. If data gathering techniques and machine learning models improve over time, it may be easier to make concrete recommendations.