Founded in 2006, the Pirate Party movement has scored a number of victories over the years.

The biggest success came in 2009 when the party gained two seats at the European Parliament. During the last year this was followed by dozens more seats in German state parliaments.

Yesterday there was another landmark victory for the Pirates, with the world’s first elected Pirate Mayor being voted into office in the Swiss town of Eichberg.

The 31-year old Pirate Party candidate Alex Arnold defeated two members of the Swiss Peoples Party (SVP), getting almost 63% of the vote in the small town on a 65% turnout. This is by far the best result for a Pirate anywhere in the world.

The election result is particularly impressive since the SVP is the largest party in Switzerland and currently holds 26% of the seats in the Swiss National Council. 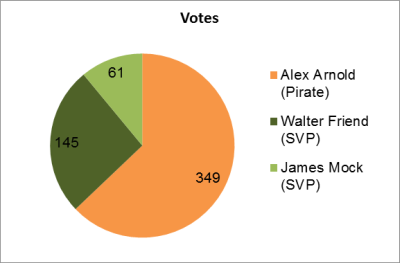 The Swiss branch of the Pirate Party, which was founded little over three years ago, sees the election win as a clear sign that the party can make its mark in Swiss politics.

”This result is an important milestone for our young party. Winning a majority vote shows that our members are not part of a fringe phenomenon but are rooted in the midst of society,” Party President Thomas Bruderer said commenting on the news.

Rick Falkvinge, founder of the first Pirate Party in Sweden, sees the election win as something that transcends a local election in a town of 1500 people. It’s an inspiration to all the dozens of other Pirate parties scattered around the world.

“To paraphrase Armstrong, this is a victory in a small town in Switzerland and a giant milestone for a growing global political movement,” Falkvinge told TorrentFreak.

“I keep seeing interest grow in our perspective and our ideas. While being a pioneer sometimes means that you discover a dead-end and have to back out to try another way, there are also moments of sheer victory to be celebrated. This is one such moment.”

In his duty as mayor, Arnold will of course be inspired by the core principles of the Pirate Party.

The focus is not going to be on file-sharing, as downloading for personal use is already legal in Switzerland. But when it comes to government transparency and people’s privacy, he may be able to set a Pirate mark.

US Removes Switzerland From ‘Pirate WatchList’