Lawsuits against file-sharers are commonplace in the United States. Over a quarter million people have been accused in recent years, most after using standard BitTorrent clients.

The cases barely make the news anymore, but that changed this summer when the makers of several Hollywood films targeted a few dozen Popcorn Time users.

Since Popcorn Time also uses BitTorrent under the hood these ‘new’ lawsuits follow the same path as previous ones. The filmmakers ask the court for a subpoena to identify the account holders, and then their lawyers approach the accused for a settlement.

This week the makers of the Adam Sandler movie The Cobbler announced that the first Popcorn Time users have begun to settle.

The company sued 11 alleged pirates in August and according to a recent court filing five have admitted guilt already. As is usual in these so-called ‘copyright troll’ cases, the defendants chose to settle for an undisclosed amount. 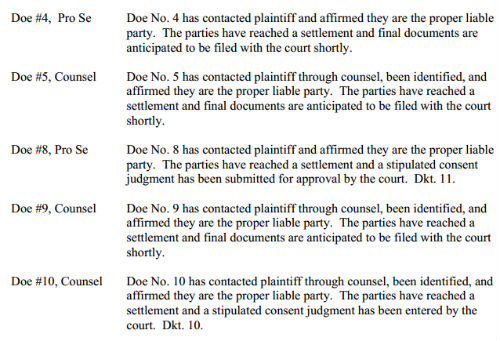 In a status report lawyer Carl Crowell, who represents The Cobbler’s makers and several other rightsholders, notes that the settlement figure is below the statutory minimum of $750.

“Plaintiff discloses that for each of the above listed defendants any settlement sums agreed on have been at or below minimum statutory damages with apportioned costs and fees,” Crowell writes.

The total figure may well exceed $1,000 though as it includes an undisclosed sum for attorney fees.

Traditionally, settlement offers in these type of cases have been around $3,000 per infringed work, although we have seen agreements detailing settlements of up to $14,000.

However, even at a substantially lower amount the litigation campaign can be quite profitable. Since the cases are built on boilerplate filings there’s relatively little work involved.

This standardized nature is also apparent from the permanent injunctions that were submitted to the court (e.g. pdf), which are identical to those in the standard BitTorrent cases. In fact, they reference “BitTorrent clients” instead of mentioning Popcorn Time specifically.

Given the early success, we can expect more Popcorn Time related lawsuits to surface during the coming months.