When large-scale access to online pirated content began to flourish at the turn of the decade, entertainment industry groups claimed that if left to run riot, it could mean the end of their businesses.

More than seventeen years later that doomsday scenario hasn’t come to pass, not because piracy has been defeated – far from it – but because the music, movie and related industries have come to the market with their own offers.

The music industry were the quickest to respond, with services like iTunes and later Spotify making serious progress against pirate alternatives. It took the video industry far longer to attack the market but today, with platforms such as Netflix and Amazon Video, they have a real chance at scooping up what might otherwise be pirate consumption.

While there’s still a long way to go, it’s interesting to hear the progress that’s being made not only in the West but also piracy hotspots further afield. This week, Brazil’s Exame reported on a new study published by Google.

Focused on movies, one of its key findings is that local consumer interest in Netflix is now greater than pirate alternatives including torrents, streaming, and apps. As illustrated in the image below, the tipping point took place early November 2016, when searches for Netflix overtook those for unauthorized platforms.

Netflix vs Pirates (via Exame) 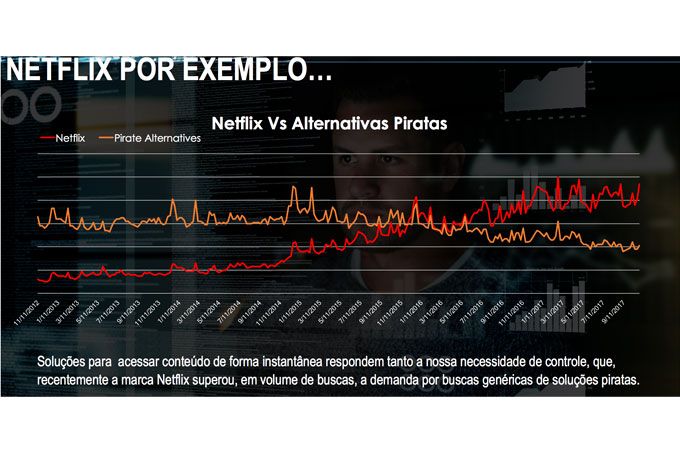 While the stats above don’t necessarily point to a reduction in piracy of movies and TV shows in Brazil, they show that Netflix’s library and ease of use is rewarded by widespread awareness among those seeking such content locally.

“We’re not lowering piracy but this does show how relevant the [Netflix] brand is when it comes to offering content online,” Google Brazil’s market intelligence chief Sérgio Tejido told Exame.

For Debora Bona, a director specializing in media and entertainment at Google Brazil, the success of Netflix is comparable to the rise of Spotify. In part thanks to The Pirate Bay, Sweden had a serious piracy problem in the middle of the last decade but by providing a viable alternative, the streaming service has become part of the solution.

“The event is interesting,” Bona says. “Since the launch of streaming solutions such as Netflix and Spotify, they have become alternatives to piracy. Sweden had many problems with music piracy and the arrival of Spotify reversed this curve.”

Netflix launched in Brazil back in 2011, but Exame notes that the largest increase in searches for the platform took place between 2013 and 2016, demonstrating a boost of 284%. Even more evidence of Netflix’s popularity was revealed in recent surveys which indicate that 77% of surveyed Brazilians had watched Netflix, up from 71% in 2016.

Importantly, nine out of ten users in Brazil said they were “extremely satisfied” or “very satisfied” with the service, up from 79% in the previous year. An impressive 66% of subscribers said that they were “not at all likely to cancel”, a welcome statistics for a company pumping billions into making its own content and increasingly protecting it (1,2), in the face of persistent pirate competition.