Determined to reduce overall piracy, the UK government first asked and then threatened Google over pirate sites appearing in its search results.

A deal announced in 2017 revealed that Google would adjust its algorithms (pdf) to make pirate sites less easy to find.

While this ‘code of conduct’ didn’t feature whole site deindexing, the MPA and BPI celebrated the ‘landmark’ agreement. Interestingly, Google itself had very little to say. In 2021, when TorrentFreak discovered that whole site deindexing was already underway in the Netherlands, Google was no more talkative than four years earlier.

Just weeks after deindexing was confirmed in the Netherlands, a similar pattern emerged in the UK.

As reported in February 2022, notices published on the Lumen Database referenced well over one hundred pirate sites, all of which had been previously blocked for copyright infringement under the orders of the High Court in London. They too were destined for search result oblivion.

The MPA finally acknowledged that deindexing was underway this March, noting that Google had already removed 10,000 domains.

As noted in our previous reports, Google will deindex entire domains if rightsholders submit a court-sanctioned ISP blocking order. Google isn’t named in these orders so there’s no legal mandate, but Dutch anti-piracy group BREIN suggested that if an injunction eventually named Google, it would have to comply anyway.

Since then, Norway, Sweden, and Denmark have been added to the silently growing list.

Search engine deindexing/delisting isn’t being promoted as one might expect, even though popular YouTube-ripping sites are some of the latest targets. Significant anti-piracy achievements are usually considered opportunities to keep content protection in the spotlight, but not in this case – with one recent and notable exception.

Rightsholders in EU member states can request injunctions against intermediaries to mitigate online infringement. ISPs are generally required to block pirate sites’ IP addresses and/or tamper with DNS to prevent customers from accessing them, but legal processes vary from country to country.

Along with countries including France (ARCOM), Italy (AGCOM), Spain (IPC), and Greece (ΕDPPI), Lithuania’s site-blocking program is also handled by an administrative authority. The Lithuanian Radio and Television Commission (RTCL) is an independent body, a regulator of broadcasters and video platforms, and the entity responsible for online copyright protection.

In an announcement last week, RTCL (also known as LRTK) said that increased cooperation with Google will lead to entire pirate sites being deindexed. The statement also confirms ‘dynamic’ deindexing, meaning that any mirrors and proxies introduced in the future will also be removed from Google’s search results.

LRTK will file court-sanctioned orders against such sites, requesting their removal in accordance with the process established by Google. This means that the domain names of all websites blocked by LRTK decisions and their copies will not be published on the Google search platform.

The LRTK notes that the unique addresses (URL, Uniform Resource Locator) of websites that access specific illegally published objects of copyright and related rights have already been removed from the Google search system before.

Whether the end paragraph is a nod towards repeat infringers, a ‘takedown/staydown’ system, or something else, the end result is the same. Pirate sites subjected to ISP blocking on one domain will not only have replacements, proxies and mirrors blocked by ISPs, but won’t feature in search results either, at least for any significant time.

Being removed from Google search is clearly a problem for pirate sites hoping to attract new users. Google previously insisted that search isn’t as important for piracy discovery as rightsholders might suggest, but the Lithuanian announcement adds another point of interest.

LRTK also draws attention to the fact that the aforementioned websites use other services for the commercialization of illegal activities, therefore, removing the websites from Google search results will limit the possibility for their managers or administrators to make a profit by publishing works without the consent of the rights holders.

As noted earlier, any deindexing by Google seems reliant on some kind of court order and LRTK/RTCL is an administrative body, not a judicial one. In this case, however, presenting court orders isn’t an issue.

Based on rightsholder complaints, LRTK/RTCL makes decisions on website blocking within 14 days, but before ISPs are compelled to block, approval must be sought from the Vilnius Regional Administrative Court, which then sanctions the blocking orders. In the case of dynamic blocking covering subsequent mirrors and proxies, returning to court is not required.

Confirmation that Lithuania is already working with Google can be found on the Lumen Database under ‘Government Requests’. The image below shows a typical example and for the curious, a few deindexing requests are linked here: 1, 2, 3, 4, 5, 6, 7, 8, 9, 10 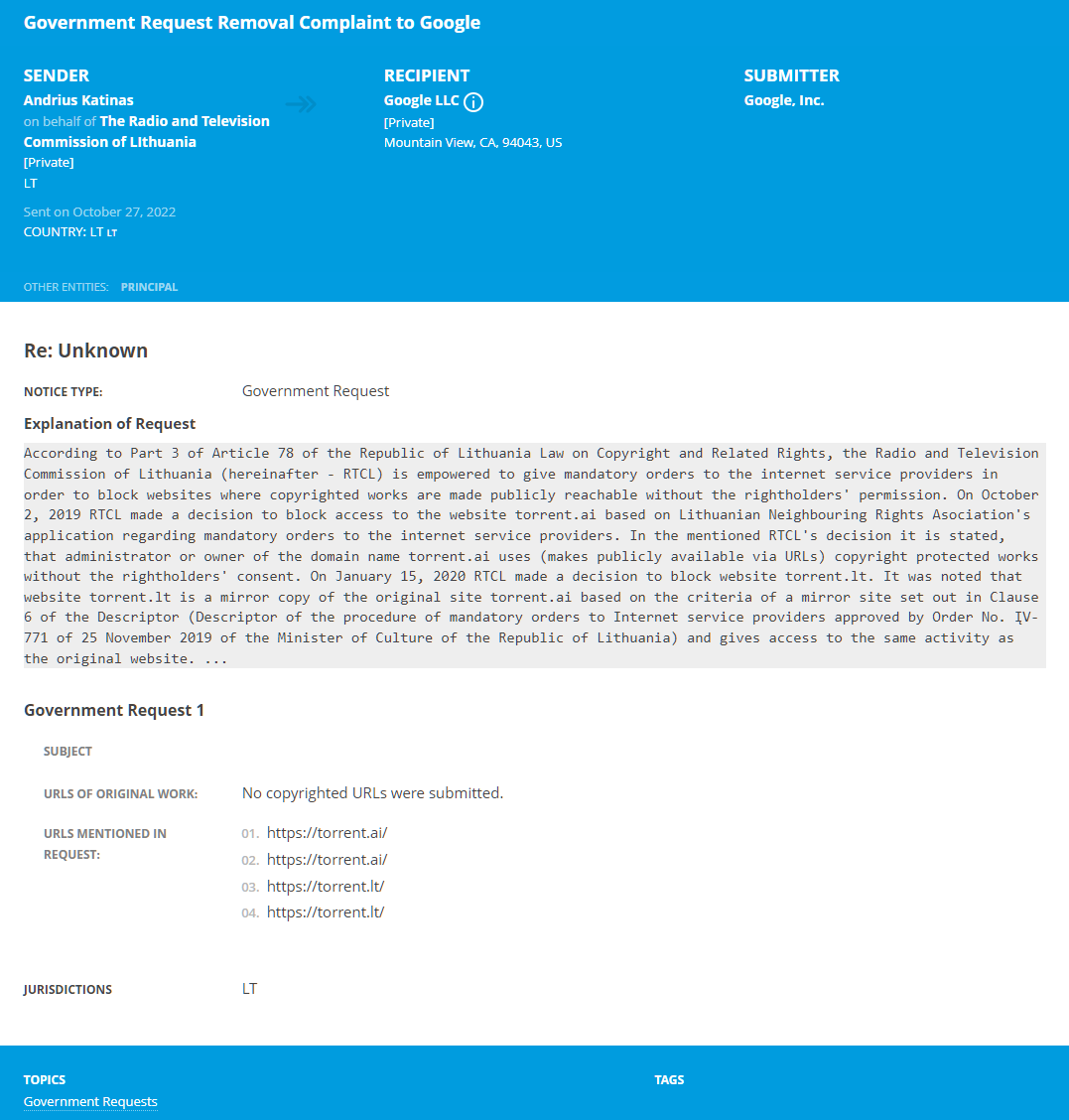