With United States authorities leading the way, domain seizure has become quite the hot topic in recent months. The process has led to hundreds of domains being taken over in the U.S., most of them connected to counterfeiting of physical products.

In addition a number of file-sharing and video related domains have been affected, from the super high-profile Megaupload and Megavideo to others such as Dajaz1 whose profile was raised because it was wrongfully seized.

More recently it became evident that domain seizures might move to Europe after a legal process was initiated in Brussels by a currently unknown entity. However, it appears that domains have been falling out of the hands of people operating file-sharing sites in the UK and into the hands of Hollywood with no court involvement at all.

Last week we were alerted to the demise of BitScores, a site that had been offering streams of sporting events, primarily soccer games targeted at the UK audience. Their trouble appears to date back a few months when the site operated under a different name.

“I am writing this email to you to let you know that Liveonlinefooty is closing down and will be moving to a new domain called www.bitscores.com,” said a message to the site’s users.

“Why are we doing this you may ask, well Liveonlinefooty is a very popular name in the online streaming world and we want to pull the plug on this before the site may get shut down out of our own control and lose all you guys for good and no way do we want that to happen.”

The message ended with a note that nothing would change but people should now log in with their same details on BitScores.com.

But things clearly didn’t go well. BitScores.com went offline last week and hasn’t been heard of since. It did, however, leave an interesting clue behind as to what caused its demise.

In the past few months the site had operated from three domains – BitScores.com, LiveOnlineFooty.com and DHMediaHosting.com. Not only are all currently inaccessible, but they all are registered to the Hollywood-funded anti-piracy group the Federation Against Copyright Theft.

As can be seen from the screenshot the site is now registered to Graeme Grant, an investigator with FACT who also has control of other domains. So we did a little digging.

Topically, considering the demise this weekend of NZBMatrix (also at the hands of FACT), the next site we found in FACT hands was NZB-Magic.com. In September this Usenet-focused site announced that “Due to legal reasons beyond our control, NZB Magic is now closed for business.” Clearly FACT caused the shutdown.

And then more sites came to light.

ThereAlZone.net, which appeared to have been offering movies, is now gone and offering a redirect to the official FindAnyFilm.com movie industry site. 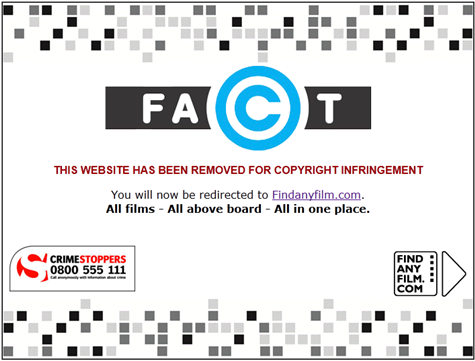 SupernovaUk.com, a BitTorrent tracker which appears to have started its life in the summer and had it brought to an end just months later, also suffers the same fate.

TeamFx.org, a URL that appeared on many movie, TV and other BitTorrent releases, is also now in the hands of FACT. The site displays a FACT banner and offers a link to the FindAnyFilm site.

Finally, FACT have also taken over WizardMods.net, a site dedicated to satellite, cable, pay TV hacking and other related activities. The site was also connected to the supply of NZB files. The domain now redirects immediately to FindAnyFilm.

So were the domains taken by force, perhaps through the courts? Apparently not.

“The domains were all signed over voluntarily following contact from FACT as one strand of our ongoing strategy which gives alternatives to prosecution in certain cases,” a FACT spokesperson told TorrentFreak.

Which in layman’s terms says “Shut down your site and give us your domain name or we’re going nuclear.”

Given what happened to Anton Vickerman, it’s little surprise that the domains are now in FACT hands.

If your site or domain has been affected by FACT action, contact TorrentFreak in complete confidence at the usual address.