In Guantanamo Film Premieres on BitTorrent 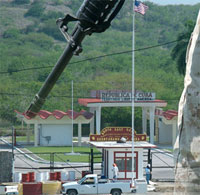 VODO, short for voluntary donation, has been a great success thus far. With support from several torrent sites including Mininova, The Pirate Bay and isoHunt, their first film was downloaded several hundred thousand times.

Today the project releases the film ‘In Guantanamo’ which makes a worldwide premiere on BitTorrent. The film documents filmmaker David Miller’s three day tour of the controversial camps, invited by the U.S. government.

“Although the event was presented as a chance to ‘see inside’ the working of Guantanamo, it was in fact a carefully staged PR exercise designed to yield predictable, stale, controlled media images,” we read on the Gitmo’s VODO release page.

The film has been officially released on VODO today and is currently featured on both isoHunt and The Pirate Bay. With help from these sites and several other partners well known to the file-sharing community, the project is able to attract a lot of eyeballs for upcoming and already established film talent.

VODO founder Jamie King told TorrentFreak that the project’s first film performed really well. “I think the first VODO release was a great success,” he said. “Around 250,000 downloads through our DISCO partners — as the filmmaker put it, that was more than his terrestrial TV release in the UK.”

As the project’s name already reveals, downloaders are encouraged to donate to the filmmakers if they appreciate their work. King told TorrentFreak that quite a few downloaders have donated generously. Not enough to fund a new movie obviously, but as the project gains more attention it is likely to bring in some serious income for the filmmakers.

In Guantanamo can be downloaded for free here.