After filing one big lawsuit, that was later reduced to just one defendant by a judge, Triller began filing individual complaints against some of the original defendants. Thus far, that venture hasn’t gone particularly well.

Last month in a California court, District Judge Fernando M. Olguin dismissed Triller’s lawsuit against YouTuber ‘ItsLilBrandon’ after failing to file for a default judgment supported by “detailed, clear, and thorough calculations” indicating the scale of the damages sought.

And now there are serious complications in other cases.

The original lawsuit that kicked off Triller’s legal campaign now has just FilmDaily.com named as the sole defendant. This is interesting in itself since FilmDaily.com is not the domain Triller is complaining about – FilmDaily.co is.

On July 30, Triller was again warned that the case against the site could be dismissed for lack of prosecution but Triller quickly responded with an appeal to the court not to dismiss the case.

According to Triller, it has been conducting an investigation into FilmDaily but had failed to inform the court about that, a decision it now regrets. However, that investigation was apparently fruitful, with Triller able to identify the “true identity” of those behind the site.

What is curious about Triller’s recent response about FilmDaily is that it alleges (but does not show) that FilmDaily.co – which appears in most respects to be some kind of news portal – actually streamed the fight illegally.

“On April 17, 2021, Defendant created and published a post titled ‘Jake Paul vs Ben Askren ‘Reddit’ Live! Free Stream, How to Watch?,’ providing a clickable link titled ‘Click To Watch Paul vs Askren Live Stream Free.’ A true and correct copy of the aforementioned post is attached hereto as Exhibit D,” it reads.

As the image of that exhibit shows, that text is indeed present. However, there’s no evidence to show that the supposedly clickable link actually did anything or was tested, there are no screenshots of a fight being shown, and there is no explanation of why the same page advises people to visit Triller Fight Club and pay $49.99 to watch the event. 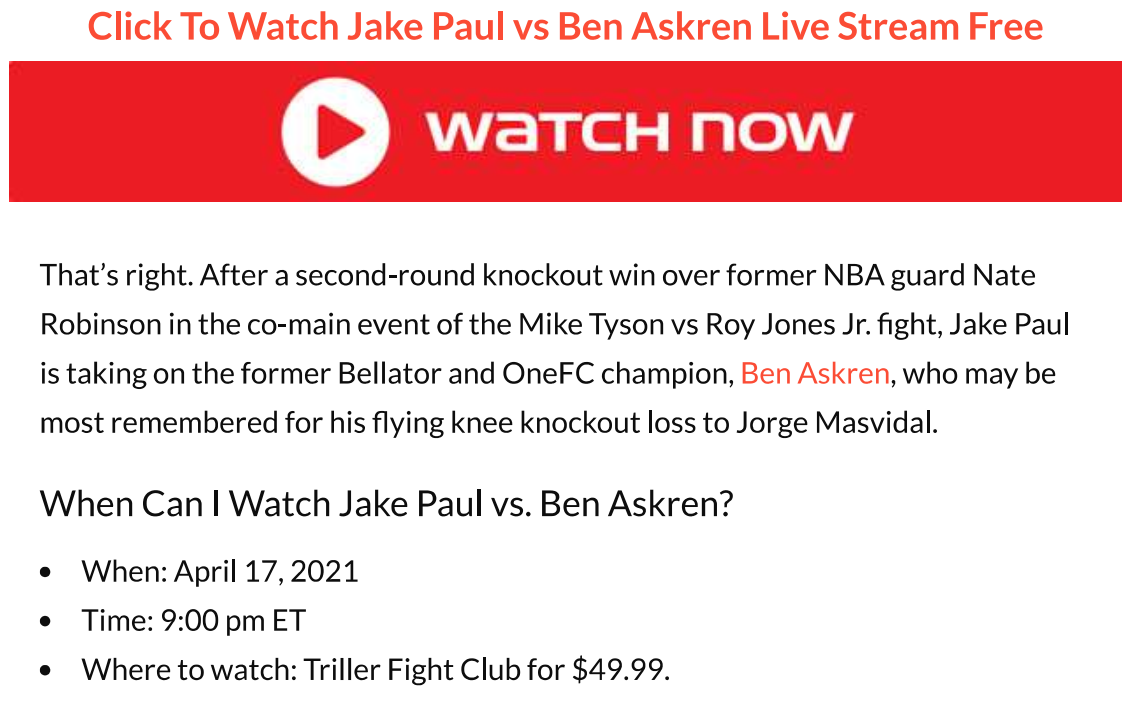 This is interesting in light of an earlier lawsuit filed by Triller against a site called AccessTVPro. This platform bears all the hallmarks of a scam site that seems unlikely to have offered the fight since it appears to be a scammy bait-and-switch-type operation. Sites like these claim to have content, lure people in, then try to extract payment for stuff they don’t have.

Triller recently told the court that it’s preparing a second amended complaint but none of that matters now. Triller was supposed to serve the defendant within 90 days of the filing of its complaint but failed to do so.

“[P]laintiff’s Response, does not establish when it obtained information about the true identity of Defendant or why it did not seek an extension of time or otherwise attempt to prosecute this action. Plaintiff therefore does not establish good cause for the delay in timely serving Defendant,” the court’s order reads.

“Plaintiff’s claim against Defendant is therefore dismissed under Rule 4(m) without prejudice as a result of Plaintiff’s failure to timely serve Defendant or establish good cause for that failure.”

On June 11, Triller filed a lawsuit in an Ohio court against an individual named Jerren Swords. According to the complaint, the Ohio resident made the mistake of taunting Triller co-owner Ryan Kavanaugh on Instagram, declaring that he’d “watched the Jake Paul fight for free” and there was nothing Kavanaugh could do about it.

As it turned out, Triller was more than happy to step up with a lawsuit claiming that Swords had breached the Copyright Act and the Federal Communications Act while demanding at least $150,000 in damages.

Triller followed up by executing a summons on Swords on June 16 and his answer to the complaint was due July 7. Thus far, Swords has failed to respond to the court and according to the judge, that could be enough for Triller to obtain a default judgment. However, Triller appears to have issues with its own legal filings.

“[P]laintiff has failed to make any effort to litigate this case since filing its Complaint. Thus, dismissal for lack of prosecution may also be warranted,” Judge Michael R. Barrett warns in his order dated August 5, 2021 (here, pdf)

Triller responded to this order in a filing dated August 11, noting that it had served Swords on June 14 and on June 28, a man claiming to be Swords’ father contacted counsel for Triller to discuss the complaint. Triller then wrote to Jerren Swords asking if he intended to retain counsel and whether he consented to Triller discussing the matter with his father.

Since then there has been no further communication so Triller is now seeking an entry of default judgment. As a result, Triller is asking the court not to dismiss the case.

On June 3, 2021, Triller sued another YouTuber – Matthew Space – the alleged operator of the Eclipt Gaming channel. With just 2,250 subscribers at the time, the channel has specialized in GTA Online videos, with most getting just a few hundred views. According to Triller, Space posted the Jake Paul fight to his channel and it was watched 297 times.

Despite the relatively small scale, Triller described Space’s conduct as “calculated and reprehensible infringement”, claiming that Space had somehow “intercepted, received and/or descrambled” their satellite signals and is therefore liable for tens of millions of dollars in damages.

On August 3, Judge Robert Gary Klausner wrote in an order to show cause (pdf) that the action against Space could be dismissed for lack of prosecution. In a filing dated August 9, Triller said that it had served Space on June 8 so he was required to respond to the court before July 9. However, Space had issues with his attorney and needed to find a new one in the right district, so Triller offered an extension until August 23.

With that in mind, Triller is now asking the court not to dismiss the action (pdf).