It began with a $100m lawsuit targeting entities and individuals who distributed the fight illegally on various platforms including YouTube.

When that didn’t go exactly to plan due to legal complications, Triller modified its approach, filing several separate lawsuits against streaming platforms and a handful of YouTubers.

In the background, Triller also launched an amnesty program, advising people who simply watched the fight illegally to pay $49.99 to avoid being personally sued.

Proving that people simply viewed infringing content is problematic since evidence showing that to be true is difficult to acquire. As it turns out, Triller feels it can proceed with legal action without much evidence at all.

Last Friday, Triller filed a lawsuit in an Ohio court against an individual named Jerren Swords, a resident of West Portsmouth, Ohio.

These claims form the basis of all Triller’s previous lawsuits filed against those it accuses of copying and/or distributing the Jake Paul video online. In this case, however, Triller is demanding damages from an individual who (allegedly) simply watched the fight online without paying for it. So what evidence does Triller possess that could enable it to file a lawsuit?

Multi-millionaire businessman Ryan Kavanaugh is the co-owner of Triller and as such has more interest than most in ensuring that his company’s content isn’t pirated online. Quite why Jerren Swords thought it would be a good idea to bait Kavanaugh is unknown but it hasn’t ended well. 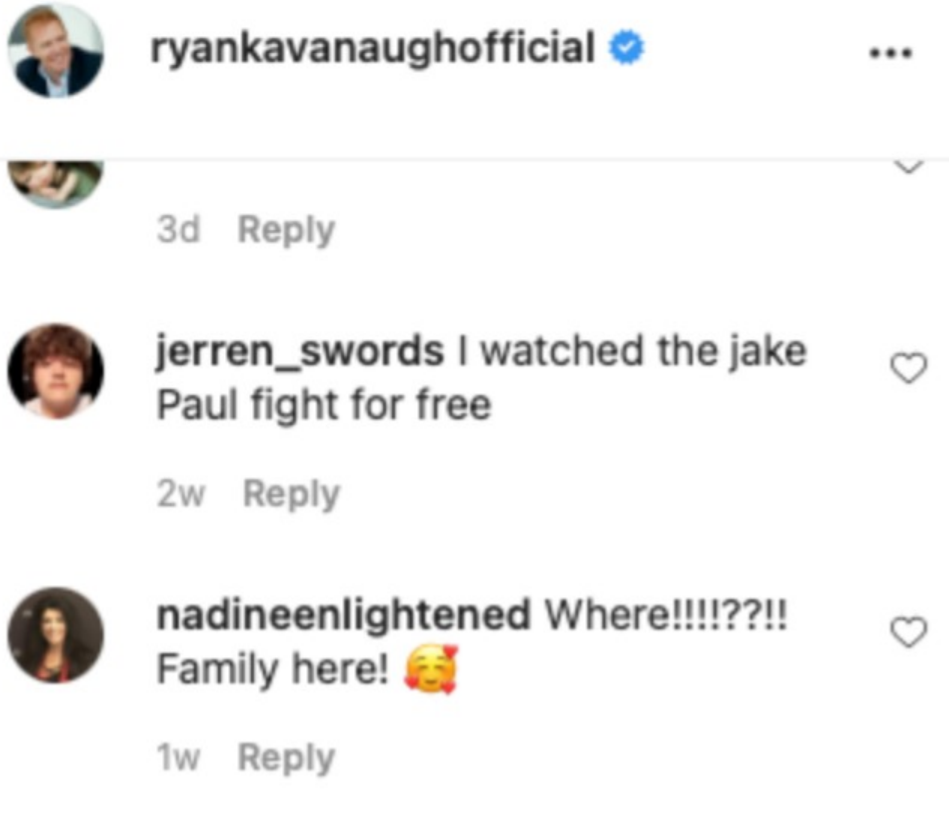 According to the complaint, Swords took to Instagram and posted on Kavanaugh’s official account, declaring that he’d “watched the Jake Paul fight for free.” A week later, a fellow Instagram user pointed out that Swords had admitted to watching a pirated fight, to which Swords replied “idc [I don’t care]. He can’t sue me.”

At this point Kavanaugh himself weighed in, implying that Swords was using a fake account. “Give me your real name,” he wrote, “and we can check about that.” 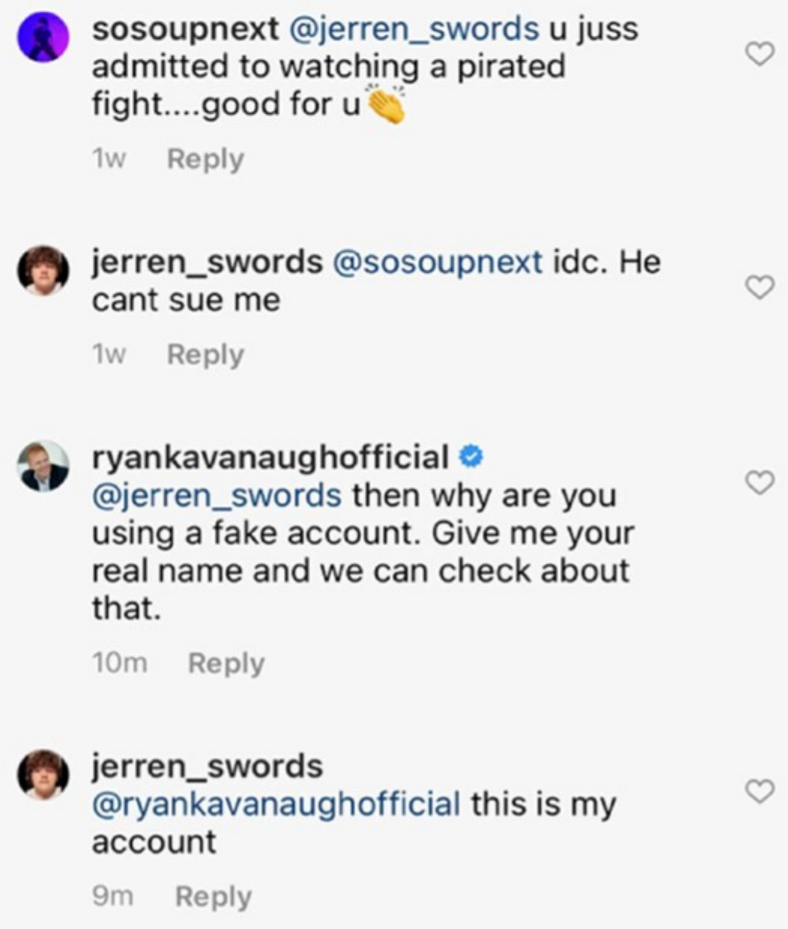 As the image above shows, Swords responded that he was using his own account, at which point Kavanaugh appears to have contacted his legal team. Unfortunately for Swords, his personal details are easily matched to his Instagram account via simple online searches.

Referencing the screenshots posted above, Triller’s complaint alleges that Swords “in or about May 2021”, “admitted knowingly, willfully, and unlawfully receiving, viewing, and illegally accessing the Broadcast without paying Plaintiff the appropriate pay-per-view fees.”

At this stage, Triller appears to be relying purely on the ‘confession’ posted to Instagram since its complaint provides no additional evidence. Nevertheless, it suggests that things could get costly.

For an alleged violation of the Federal Communications Act (unauthorized reception or use of communications), Triller seeks damages of up to $10,000 plus costs, interest and attorneys’ fees. For a breach of the Copyright Act (Triller claims that Swords “knowingly, willfully, and unlawfully accessed, received, viewed, distributed, and/or displayed the broadcast), the company demands statutory damages of up to $150,000.

That Triller is prepared to file a lawsuit based on a few lines of text posted to an Instagram account raises questions in itself. People post all kinds of nonsense online every single day so whether Swords actually watched the fight illegally is something that will need to be proven to the court’s satisfaction.

Questions are also raised by other claims in the lawsuit, including Triller’s assertion that Swords watched its live broadcast.

The complaint states that Swords watched the fight “at the time of its transmission” which isn’t supported by anything that Swords wrote on Instagram. However, even if that is indeed the case, it’s hard to see how Triller would be entitled to an injunction restraining the defendant from causing Triller further damage.

“Further harm and injury to Plaintiff is imminent, and Plaintiff is without an adequate remedy at law with respect to such harm and injury. Unless Defendant’s acts are enjoined, it is highly likely that Defendant will continue to unlawfully access, receive, view, distribute, display or otherwise infringe Plaintiff’s copyrighted content,” Triller warns.

When dismissing all but one of the plaintiffs in Triller’s initial lawsuit against entities alleged to have distributed the fight, the judge noted that Triller’s demand for an injunction failed to state why it was still suffering harm after its event had concluded.

“Plaintiff does not, however, explain what irreparable harm it continues to suffer from the availability of copies of a live sporting event that occurred weeks ago, the outcome of which is publicly available, and lasted less than two minutes,” he wrote.

The case against Swords is before a different judge in another district but at least in theory, the same questions could be raised in this matter too.

It is extremely rare for a plaintiff to pursue someone for simply watching pirated content since these cases are notoriously difficult to prove. That being said, Triller may have something else in mind. Faced with a lawsuit of this magnitude, it’s possible that Swords will be persuaded to settle instead. That would provide a useful “head on a pike” to others considering watching Triller’s shows illegally in the future.

In advance of that, it may also encourage people to pay the $49.99 settlement fee being proposed on Triller’s amnesty page, an offer that is set to run for the next two weeks.

Triller’s lawsuit against Jerren Swords can be found here (pdf)