Hosting providers are generally seen as neutral intermediaries, but some copyright holders believe that these companies should bear more responsibility.

This isn’t a new idea. Back in 2015, leaked documents from the Motion Picture Association revealed that the Hollywood group had considered taking legal action against a hosting provider. At the time it mentioned Leaseweb as an example.

The hosting company already entered the spotlight a few years prior. It was one of the hosting partners of Megaupload, which rented 630 servers from the company. This association also triggered a separate lawsuit by magazine publisher Perfect 10, but that was eventually settled.

Earlier this year, Leaseweb was targeted in a copyright lawsuit once again. This time, a group of filmmakers, including Dallas Buyers Club LLC and Rambo V Productions, accused the hosting company of failing to take action against copyright infringing customers.

These customers are VPN providers such as LiquidVPN that, in turn, have customers who allegedly shared pirated movies. The movie companies argued that they sent thousands of takedown notices to alert Leaseweb of this activity, but the hosting company allegedly failed to take action.

“Leaseweb continued to provide service to the subscribers such as LiquidVPN and DOES 1-10 despite knowledge that its subscribers were using the service to engage and facilitate massive piracy of copyright protected Works including Plaintiffs’,” the complaint read.

This lawsuit is still ongoing and Leaseweb has yet to respond to the allegations in court. However, it appears that the movie studios are keeping the pressure on, as they have just obtained a subpoena that orders the company to hand over customer data.

A few days ago, attorney Kerry Culpepper obtained a DMCA subpoena on behalf of dozens of movie companies. It specifically requests the personal details of Leaseweb customers connected to 456 IP-addresses.

Since it’s a DMCA subpoena, the court doesn’t have to decide over the request and it was quickly signed off by a court clerk. 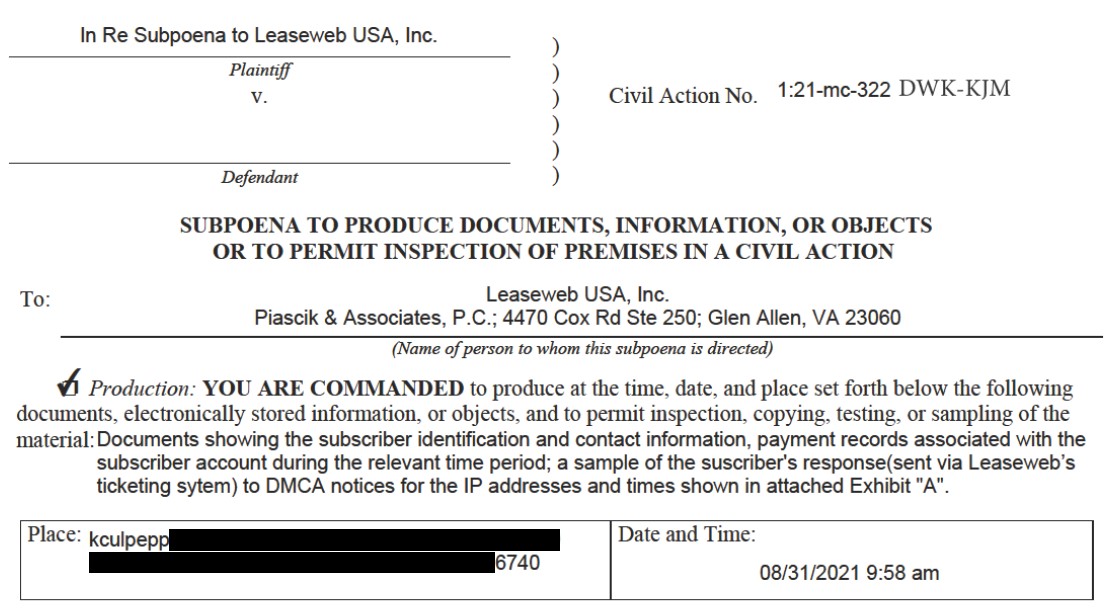 This means that Leaseweb is required to hand over documents that can identify the customers connected to these IP-addresses. That includes all contact information and payment records it has on file.

TorrentFreak reached out to Leaseweb asking how the company plans to respond but we have yet to receive a reply.

It is likely that the movie companies plan to use Leaseweb’s customer data to advance their legal efforts. This could include adding additional VPN defendants to the ongoing lawsuit.

Interestingly, the legal paperwork also sheds some light on the pressure Leaseweb faced before that lawsuit started. It includes a letter the movie companies sent last October, where they offered the hosting company an option to settle the matter outside of court.

This would involve terminating accounts of various customers who are deemed repeat infringers, as well as paying a sum of money to compensate for the piracy damages claimed by the movie companies.

Leaseweb apparently declined this offer as the company was sued by the same movie companies a few months later. And with the recent DMCA subpoena, the legal pressure has only intensified.