Over the years, pirate streaming services have eclipsed torrent sites and direct download portals in popularity.

These streaming sites are seen as a massive problem in Hollywood, which made it a priority to shut them down.

The Alliance for Creativity and Entertainment(ACE) is actively trying to find out who’s behind these sites, through DMCA subpoenas for example. However, there are other means to hit these streaming portals as well. That includes going after their domain names.

Rightsholders regularly complain to domain registries and registrars about pirate sites. Most of these companies prefer not to get involved without a court order but occasionally we see some action on this front.

A few days ago, the .io registry ‘took down’ two of the largest pirate streaming sites. Lookmovie.io and Cuevana3.io suddenly stopped resolving after their domain status was changed to “ServerHold.” The same also applies to the slightly smaller site Emovies.io.

This status, which is set by the domain registry, effectively makes the domain unusable. While no official explanation is available, it’s safe to assume that this action was triggered by a copyright complaint.

TorrentFreak reached out to the .io registry, hoping to find out more, but thus far we haven’t heard back.

At this point, we can only speculate on the forces behind the domain suspensions. In this light, it’s worth highlighting that the .io registry was bought by Afilias a few years ago, which was acquired by Donuts not much later.

The Donuts link is crucial as the MPA; which is part of ACE, has a “trusted notifier” deal with the company which allows the Hollywood group to report pirate sites, whose domains can then be suspended. The same appears to have happened to Watchsomuch and Watchseries last week.

Update: After publication, MPA’s Executive Vice President and Chief of Global Content Protection Jan van Voorn informed us that ACE is not behind these suspensions.

“The suspension of these specific two domains was not the result of direct enforcement by ACE, but as you know we execute similar actions all the time. We collaborate with a number of domain name registries, registrars, and other intermediaries to take down pirate sites and their supporting infrastructure and identify operators, and we are happy to see the .io registry has joined the fight.”

“All high profile pirate sites and services are targets for ACE, and should expect an enforcement action aimed against them sooner rather than later,” Van Voorn added.

While losing a domain name will hurt a site’s traffic temporarily, Lookmovie and Cuevana3 have no plans to throw in the towel. In fact, Lookmovie swiftly moved to lookmovie2.to and, in addition to explaining what went down, the operator took this opportunity to announce a new design.

“[The domain suspension] happened without any prior warning from our registrar or anyone else. Whether they knew but couldn’t tell us, didn’t want to tell us or didn’t know, the fact remains that the domain is as good as dead,” Lookmovie explains.

“The domain might be down, but we are not. We were planning to release a new fresh design of the website with new features in the next few days but since we are at this point already, what the hell… we did it now on our new domain – lookmovie2.to” 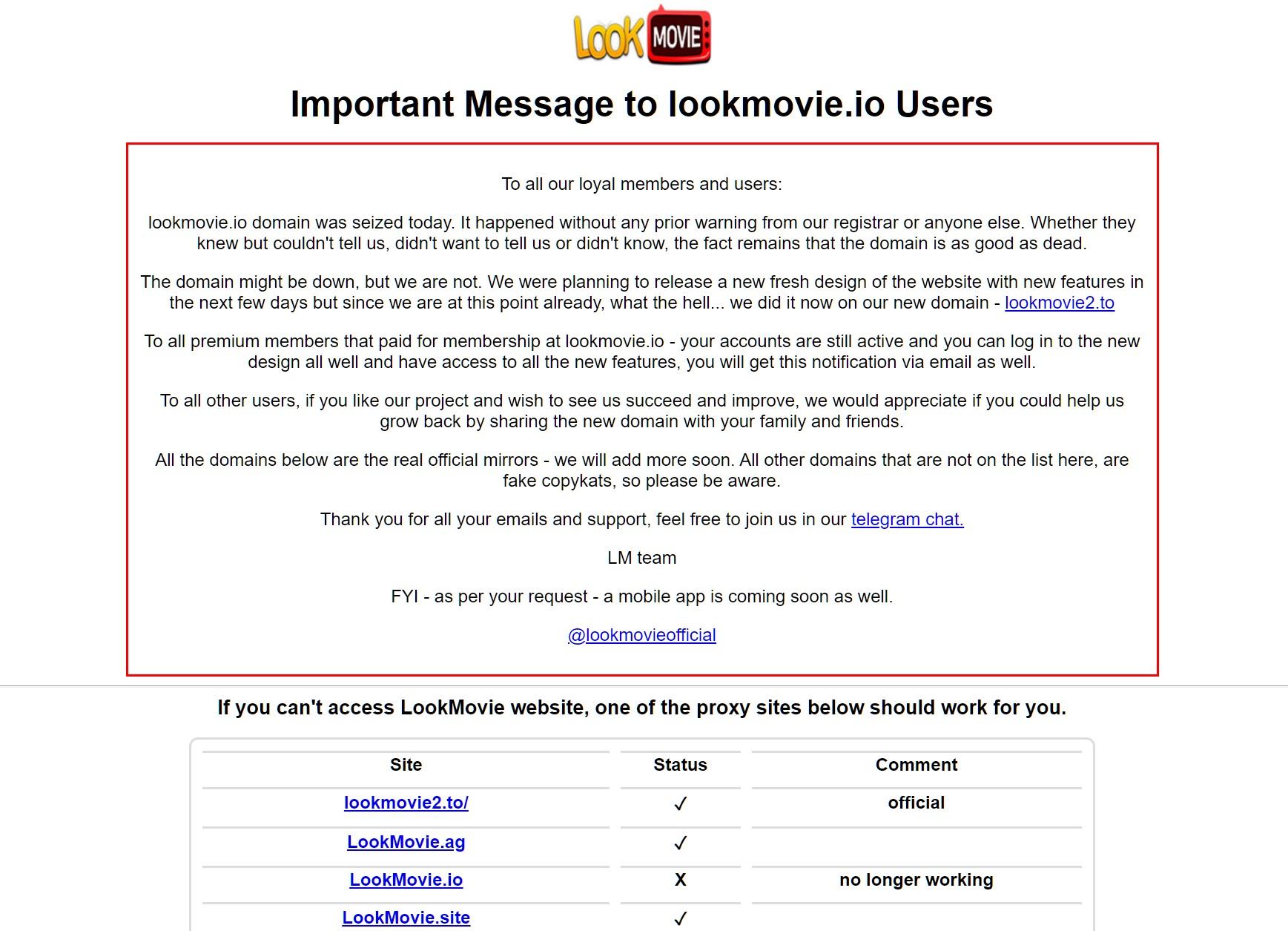 Lookmovie warns its users not to fall for fake sites and other copycats. To point people in the right direction, the operator published a list of more than a dozen official backup domains, in case these are needed in the future.

Similarly, Cuevana3 isn’t going anywhere either. The site has reportedly moved to cuevana3.me where visitors are welcomed with the following message, translated from Spanish.

“Dear users, thank you all for the great support you are giving us on social networks, especially on Twitter. We want to ask that you add the hashtag: #Cuevana3.me so that people don’t get confused with the clones.” 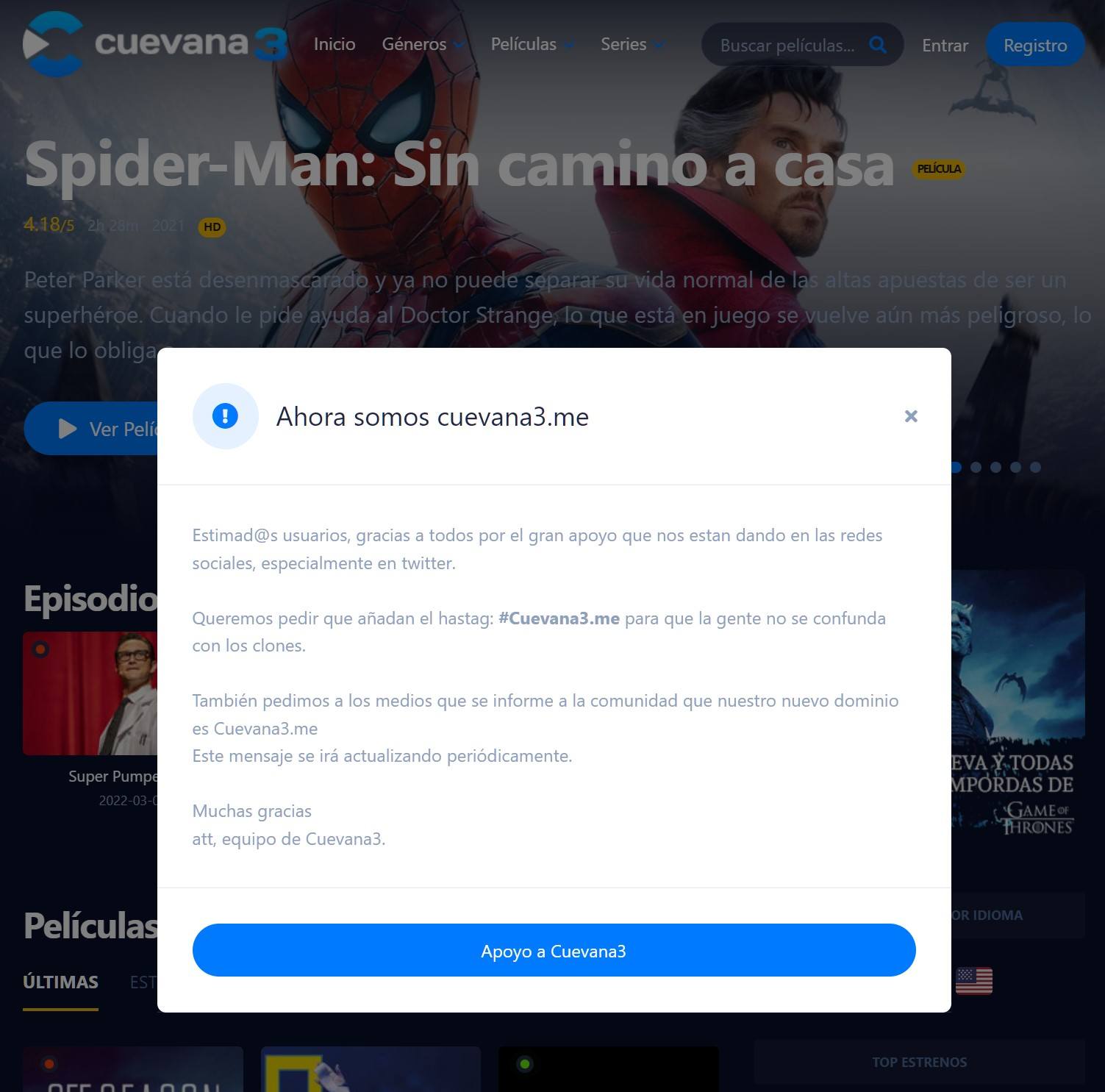 It shouldn’t come as a surprise to see that the targeted sites are taking countermeasures. After all, it’s not the first time that this has happened.

Last year, ACE reported that it had shut down Cuevana. Following a cease and desist letter, 30 Cuevana-related domain names were signed over to the movie industry group. However, Cuevana wasn’t completely down, as the .io domain name was still operational and thriving.

For now, there’s no sign that this game of whack a mole is about to end soon. At least, not by going after replaceable domain names.

Update: This article was updated to include a comment from the MPA and we removed some disproven speculation as well.