Mininova is currently the most visited BitTorrent site, and with approximately 3.5 million visitors a day, the site has gathered a spot among the 50 most popular websites on the Internet.

When we reported about the 3 billionth download back in November, Erik from Mininova told TorrentFreak: “We hope to reach the 4 billion mark in 4 or 5 months from now”. He didn’t have to wait that long, as it only took 78 days before they got there. The TV-show category remains the most popular, approximately half of all downloads from Mininova are torrents relating to TV-episodes.

The popularity of Mininova became apparent a few weeks ago when the site was offline for nearly a day because of hardware issues. The millions of visitors had to go elsewhere to feed their BitTorrent habit, and as a result, other sites like Torrentz.com and SumoTorrent saw a huge traffic increase, and almost went down under the strain.

The Mininova team will continue to optimize the site in order to handle the continuous traffic increase. On top of this, they are also adding new services and features such as a content distribution platform for independent publishers, a music streaming feature, and more recently, video streaming.

From the looks of it, Mininova’s growth will not be halted anytime soon, unless there is outside intervention. Last week, the Dutch anti-piracy organization BREIN announced that it will take legal action against the site, not to take it down, but to force it to filter copyrighted content. Erik from Mininova said in a response they “will proceed to court with full confidence,” and they will continue to serve torrents. 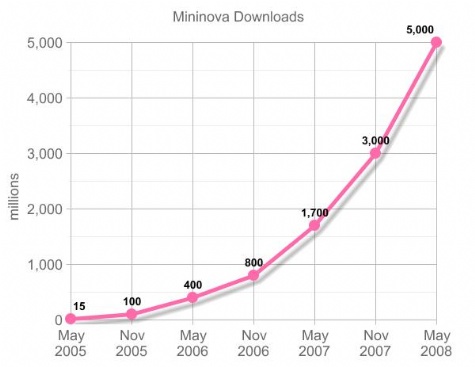