The RIAA is one of the most active senders and has asked Google to remove over 23 million links to copyrighted content.

Perhaps inspired by its musical counterpart the MPAA also joined in last month, but clearly with a different strategy. The RIAA submits over half a million URLs per week but the MPAA is currently averaging a measly 163.

However, looking more closely at the MPAA’s takedown notices we see an interesting pattern. Where other copyright holders use dragnet scripts to take down everything that links to infringing copies, the MPAA specifically targets homepages of websites.

One of the targets taken out this week is the new KickassTorrents domain Kickass.to. Just four days after the torrent site switched to a new domain following legal troubles in the Philippines, the MPAA sent the following notice. 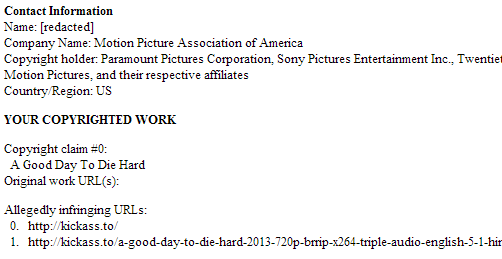 As a result of this notice the Kickass.to homepage no longer appears in Google search results but this is no isolated incident.

As can be seen here, most of MPAA’s takedown notices only contain a few URLs, often homepages of download portals or streaming sites. In many cases the infringing work listed in the takedown request no longer appears on the homepage, and the MPAA often fails to list the internal page it’s supposed to link to.

Overall this strategy is producing varying results as Google takes “no action” in response to many of the MPAA’s notices. In some instances this is because the movie group added a space to the URL, producing a 404 error. However, Google also appears to dislike the submissions of URLs that indirectly link to infringing content.

The question that remains is why the movie group chooses to specifically target homepages while leaving many infringing links online. One likely answer is that it’s trying to reduce traffic to the sites by making them harder to find through generic search terms such as “download free movies.”

TorrentFreak asked the MPAA to comment on their strategy a few days ago, but we have yet to receive a response.