The Association of Independent Music (AIM) represents the interests of more than 800 independent music companies in the UK.

With online copyright infringement as one of the major threats, the organization also offers assistance on the anti-piracy front.

Earlier this year, AIM teamed up with anti-piracy tracking outfit MUSO to help its members remove pirated links from the web. With MUSO’s automatic takedown service, the labels can remove infringing URLs with minimal effort.

This week AIM sent out a press release showing how much has been achieved over the past four months. The results, shared by AIM’s Head of Legal & Business Affairs Gee Davy are impressive indeed.

“AIM’s partnership with MUSO began in May this year, and to see 5 million takedowns achieved already reflects the speed and efficiency with which MUSO has covered the catalogs across the independent music community,” Davy notes.

“Our members report that they are delighted with the service, which not only protects their releases from online piracy, but creates a visual dashboard to track piracy and protection activity in real time.”

While the comments suggest that pirated content was pulled offline, the reality appears to be quite different.

The press release doesn’t mention it, but, from what we can see, the five million takedown requests were (nearly) all targeted at Google. This means that no infringing content was taken down there, only search results.

Looking more closely at all the takedown requests MUSO sent to Google, on behalf of AIM, an even more disturbing picture emerges.

Google’s Transparency Report confirms that AIM sent close to five million ‘pirate’ URLs to the search engine. However, as it turns out, the vast majority of all reported URLs were not removed. And for a good reason.

Most of the links that were reported are simply not in Google’s search index. So, logically, there is nothing to remove. 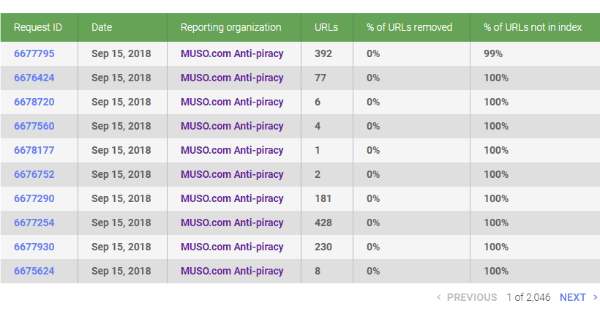 This also means that MUSO and AIM shouldn’t refer to these as removed links, or even takedown notices. These are reports of “non-existent” search results.

While Google previously noted that it accepts takedown notices for these types of URLs in some cases, which could end up on some sort of preemptive blacklist, there is more reason for concern.

Not only are most of the reported links missing from Google’s search results, they don’t always link to anything infringing on the pirate sites either.

Here’s a random sample that was taken from one of the recent takedown requests. This shows search results on a Zooqle proxy in various languages, which appears to be automated. 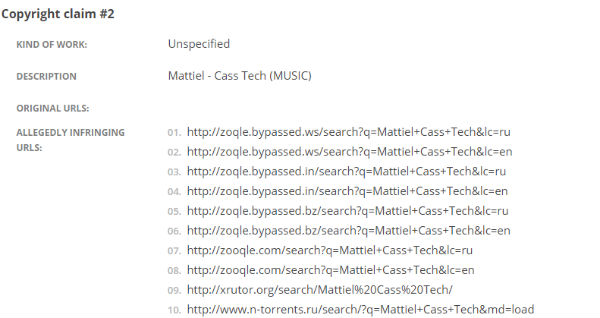 As mentioned before, these links were never indexed by Google. However, even the torrent site in question doesn’t return any infringing content, as the searches in question return no results.

The above suggests that most of these takedown efforts are rather pointless. The URLs are not in Google’s index and even if they were, many would not point to infringing content.

To us, it appears that many of these notices are automatically generated by using variations of search strings on pirate sites, whether these point to actual pirated content or not. This is something we have spotted before.

This makes it easy to get to 5 million ‘takedowns’ in four months, of course, but it is rather futile.

TorrentFreak asked both AIM and MUSO for a comment yesterday. Both confirmed receipt of our inquiry, but at the time of publication, we have yet to receive a response to our questions.