Pirate Party Will Fight Anti-Piracy Group, Inside or Outside Court

This week Swedish anti-piracy group Rights Alliance stepped up their battle against The Pirate Bay by attacking parts of the site’s infrastructure operated by third parties.

The first and most remote casualty was the bandwidth supply coming from Swedish ISP Portlane. They provided Internet connectivity to a company called Serious Tubes, who in turn supplied the Pirate Party. In order to keep their supplier out of the upcoming battle, mid-week Serious Tubes routed their traffic around Portlane.

“Given that Rights Alliance threatens to drag the Pirate Party and individual representatives of the party to court for giving Pirate Bay Internet access, a demonstration has been organized for this Saturday to support the party and free society,” says party leader Anna Troberg.

The demo will take place in the Citizen Square (Medborgarplatsen) in Stockholm at 14:00 with Anna Troberg and Member of the European Parliament Christian Engström as speakers. 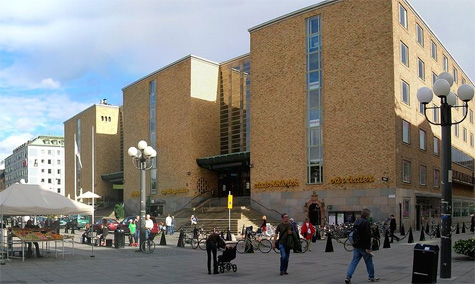 “This is primarily a democracy and freedom of speech issue, not a file sharing issue,” Troberg explains.

“It’s not fair for private companies on their own authority to dictate how and where we communicate with each other based on their own economic interests. It is in fact a threat to the open society. It is not fair for these companies to indulge in an organized extortion racket without ever meeting resistance.”

Despite recognizing a clear threat to the free and open Internet, Troberg says it’s quite remarkable that the entities with a real interest in this battle’s outcome (and the financial clout to influence it) are remaining so passive.

“Where are the major ISPs? Those with real financial muscle to take on a lawsuit? Why do the poor individual file sharers stand alone against the copyright industry’s Henchmen? Why do they have no interest in helping the only political party that stands up for their right to deliver Internet without being exposed to threats? Why do they do nothing?” Troberg questions.

Last year when the BPI threatened the UK Pirate Party over its Pirate Bay proxy, it quickly became clear that industry group was not only threatening the party, but the individuals involved with its operations.

The BPI bristled at the notion that they were being personally vindictive and insisted that since the UK Pirate Party is not a “legal personality” they had no choice but to target its members.

Whatever the motivations behind the tactics, the Swedish Pirate Party now face similar issues.

“Since [the threats] arrived I and several members of the Pirate Party have had to talk to our families about how we will be able to handle our lives if it turns out that our political commitment might potentially cost us both months apart and our economic security for the foreseeable future. How does one have such a conversation? I do not know. I just know that NO ONE should have to have such conversations in Sweden 2013,” Troberg says.

So what will the outcome be next Tuesday? Will the party choose to fight the world’s largest entertainment companies in court, even with the almost inevitable outcome of the side with the largest bank balance coming out the victor?

This morning TorrentFreak was informed that nothing has yet been decided and that the announcement will go to the wire next week. Whatever the outcome a fight is promised, whether that’s inside or outside court.

“On February 26, I will tell the Rights Alliance that the Pirate Party is picking up their thrown glove. If we choose to fight in the courts or outside the courts remains to be seen,” Troberg says.

“Regardless, we are not going to let them win by walkover.”