After being founded in 2009, French site Liberty Land (LL) made its home in Canada. At the time listed among France’s top 200 sites, Liberty Land carried an estimated 30,000 links to a broad range of unlicensed content.

Like many other indexes of its type, LL carried no content itself but hosted links to content hosted elsewhere, on sites like Megaupload and Rapidshare, for example. This didn’t save the operation from an investigation carried out by rightsholder groups SACEM and ALPA, which filed a complaint against Liberty Land with the French authorities in 2010. 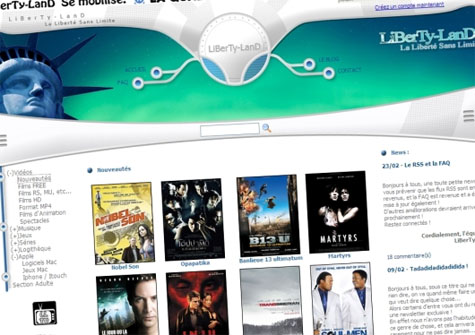 In May 2011 and alongside complaints from police that the people behind Liberty Land had taken extreme measures to hide themselves away, authorities arrested several men linked to the site in Marseille, near Le Havre, and in the Paris suburb of Montreuil.

Despite the men facing a possible five years in jail and fines of up to $700,000, the inquiry dragged on for nearly seven years. The trial of its alleged operators, now aged between 29 and 36-years-old, finally went ahead January 30 in Rennes.

The men faced charges that they unlawfully helped to distribute movies, TV series, games, software, music albums and e-books without permission from rightsholders. In court, one defended the site as being just like Google.

“For me, we had the same role as Google,” he said. “We were an SEO site. There is a difference between what we were doing and the distribution of pirated copies on the street.”

According to the prosecution, the site made considerable revenues from advertising, estimated at more than 300,000 euros between January 2009 and May 2011. The site’s two main administrators reportedly established an offshore company in the British Virgin Islands and a bank account in Latvia where they deposited between 100,000 and 150,000 euros each.

While the men will no doubt be relieved that this extremely long case has reached a conclusion of sorts, it’s not over yet. 20minutes reports that the claims for damages filed by copyright groups including SACEM won’t be decided until September and they are significant, totaling 60 million euros.