In late April a memorandum was signed by Bulgaria’s Interior Ministry and the IFPI which effectively declared war on music piracy in the country.

Within days of this announcement Yavor Kolev, the head of Bulgaria’s Computer Crimes Department, stated on national TV that he would begin taking tough action against BitTorrent sites and other file-sharing locations, especially those that profit from their activities.

“We will shut down Zamunda and Arena BG and their servers that supply pirated movies and music and take money from their users via premium SMS,” Kolev told the media. However, neither site takes money from BitTorrent users in this way, instead generating income from advertising. This week it became clear that other sites would be targeted first.

According to the Ministry of Internal Affairs, it has just carried out “the largest ever operation against Internet piracy in Bulgaria”.

Four file-sharing sites were targeted – nanoset.net (which advertised new releases via Twitter), rapidadd.com, 4storing.com and afasta.com. They are accused of distributing music, movies, books and software without the permission of copyright holders and as of today, all four remain down.

After several months of investigations, on a judge’s authorization and under the supervision of the Deputy District Prosecutor, on Thursday authorities moved against the sites. It is being claimed that they were being operated by “an organized crime group” which employed “sophisticated mechanisms for concealing the location of their servers”.

Nevertheless, as can be seen from the photos below and the video here, servers -18 in all containing a claimed 120TB – were found. Computer equipment and documents were also seized from the office of a 37 year-old man who is claimed to be the organizer behind the “criminal activity”. He was arrested. 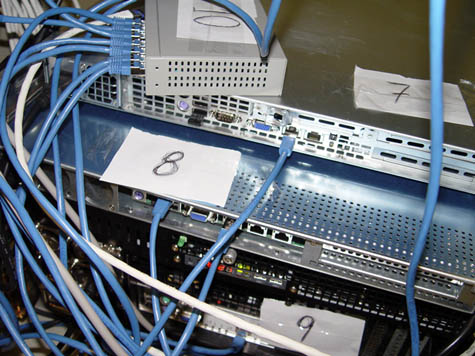 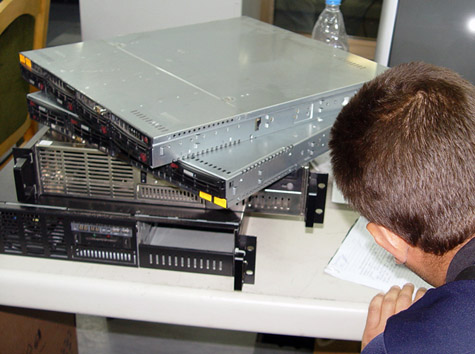 The Ministry goes on to state the operators of the websites had been profiting from the distribution of copyright content to the tune of $3.34 million by charging users to access material via premium SMS services. One TorrentFreak reader familiar with the situation noted that SMS providers in Bulgaria can take as much as 40-50% of each SMS payment, so the amount allegedly generated should be treated with caution.

While the four busted sites did accept SMS payments, as with many one click hosters, premium accounts with greater features were available for a price. The sites also gave users the ability to use their facilities for free.

Although the head of Bulgaria’s Computer Crimes Department had threatened action against Zamunda and Arena BG “and their servers that supply pirated movies and music and take money from their users via premium SMS”, both torrent sites remain operational today. However, research on the backgrounds of two of the raided sites, 4Storing and Afasta, appears to show some earlier links to ArenaBG although the exact nature of these connections remain unclear.