This week saw unprecedented action against the Hungarian BitTorrent scene. As is always the case with these types of actions, until the smoke clears most details are largely unverified but thanks to information provided to TorrentFreak by Sct of ASVA.info (the country’s biggest P2P blog) and our Hungarian contacts, we can provide an outline.

Following investigations carried out by ASVA.hu (movie industry group) and PROART.HU (Association of Authors Rights) since early 2010, on Wednesday co-ordinated police raids across the country targeted many torrent sites, an ISP and even a technical university.

Ncore, the largest site targeted in the raids with around 900,000 peers, was the most prominent to be taken offline. Unconfirmed reports suggest that the main site may still be intact as the police only found the site’s proxy.

While quite a few sites went down once news of the raids started to spread, it remains difficult to be 100% certain which were actually visited by the police and which went down as a precaution.

1stTorrent appears to be trouble as they are calling out for a lawyer with IT/copyright expertise but have offered users assurances that their details are safe. Bithorló definitely had their servers seized as did GigaTorrent, Evolution, Blue Dragon, Dreamland and Deja Vu.

Insane and Pirate Bay reportedly received warnings of a raid and shut down voluntarily.

It is clear, however, that the raids were significant. According to the police, more than 50 servers were seized containing more than 500tb of data. Sources have confirmed that in addition to searches on an ISP and university, many seedboxes were seized. 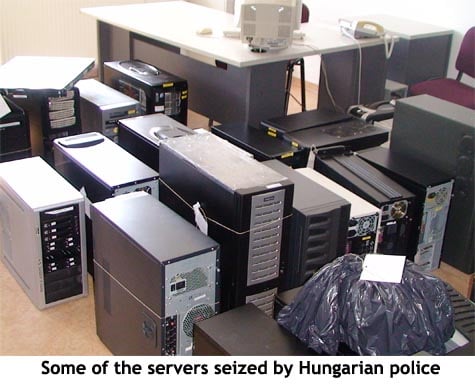 Labeling the operations as “a huge milestone in the fight against Internet piracy”, the Association of Authors Rights (PROART) thanked the police for carrying out the raids and praised them for “establishing protection for the rights of creators”.

Under pressure from the United States, Hungarian authorities have carried out at least two sweeps against torrent sites in recent years, notably in 2007 and 2009.

Interestingly, a report on the PROART website from last month celebrates the news that the U.S. government recently removed Hungary from a blacklist due to its previously poor record in dealing with piracy.

In the meantime, the large Bithumen tracker, which was named in official documents as a target for closure, continues to operate from Germany.