Supporter of copyright law or not, targeting politicians for copyright violations is becoming more common these days, with Sarah Palin becoming the latest one in the crosshairs.

The question is, however, whether these cases will have any affect on the pro-copyright lobby in Washington, which continues to call for ever more stringent legislation.

During the 2008 US presidential campaign, Republican candidate John McCain suffered a string of take-down notices mainly stemming from music and TV clip usage.

While some were clearly over-reaching, in many ways that helps to express the current frustration and one-sidedness of copyright these days. Now his vice-presidential candidate is experiencing life as the target of a copyright suit.

Sarah Palin, former Alaska Governor, tea party darling, and Fox News pundit has been targeted in a copyright infringement suit over a photograph. The picture, showing a flag being raised at Ground Zero of the World Trade Center, was edited and posted by Palin’s Political Action Committee (election fundraising group) SarahPAC on Facebook.

According to the complaint SarahPAC uploaded the photo on September 11, 2013, slightly modified to appear more ‘patriotic.’ As a result, North Jersey Media Group, owner of the photo, is suing for copyright infringement, requesting either damages and defendant’s profits, or statutory damages. 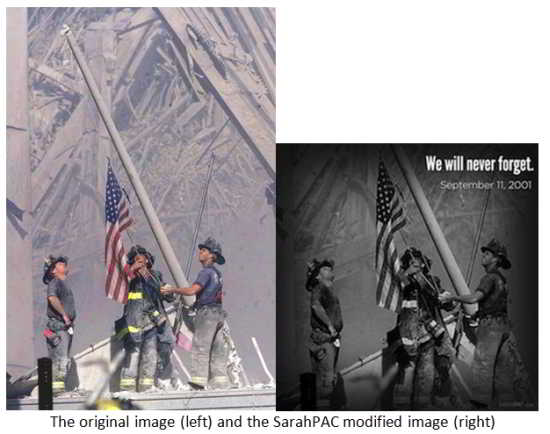 SarahPAC have now denied the allegations, claiming fair use. It’s a claim that has no better than a fair chance of winning, but one which handily points out that infringement on a site with commercial activities, does not make it a commercial infringement.

Regardless of the merits of this particular case, however, it’s part of a growing trend in which politicians are being increasingly taken to task and targeted  for infringement. The result is that these lawmakers are made more aware of the disparate nature of copyright law with regard to common practice, as well as its chilling effects on free speech.

The biggest question though, is if this increased targeting of politicians will make them think twice about the continued expansion of both copyright duration and punishments for infringement.

Historically, speaking out against stifling copyright policies is not always the best career move in Washington. Last year’s paper by Derek Khanna got him fired from the Republican Study Committee Caucus after displeasing some members, including the country-music friendly Rep. Blackburn.

But perhaps the tide could change?

After all, it’s well known that politicians are all for making laws that benefit contributors, right up until those same laws start targeting politicians. Then the laws start to be relaxed in the name of freedom, and justice, and that’s not a bad thing at all. As for Palin, odds are she’ll settle.