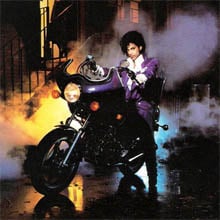 On April 21 the world lost one of its greatest musical icons. Aged just 57, Prince passed away at his Paisley Park home.

Having shifted just 1,400 albums in the 72 hours prior to his passing, the days that followed saw Prince dominate both the news and the hearts of millions of fans.

Of course, not everyone was keen (or had the means) to put their hands in their pockets and as a result unauthorized downloading of Prince tracks was also brisk. The day after his death saw an estimated 100,000 people download a Prince torrent, with Prince music dominating the top five most-shared music file slots on KickassTorrents.

But while Prince may be gone his musical machine lives on. His tracks and albums remain available to buy and the anti-piracy protection they’ve enjoyed for years continues.

Famous for working with anti-piracy outfit Web Sheriff while he was alive, Prince’s instructions to protect his music from Internet pirates continue after his death. As part of a long-running campaign to make Prince music harder to find, Web Sheriff has been hitting Google with requests to remove thousands of URLs linking to unauthorized copies since 2014.

During the past year most Web Sheriff notices have included anything from a handful to a few hundred links per notice but in the days directly after Prince’s passing, Web Sheriff reporting to Google surged to a thousand in a single notice. One has to track back to 2014 to find similar levels.

As ever, the most popular targets are URLs on the hundreds of torrent sites in operation today. The content targeted includes anything from singles and albums, right up to entire discographies and full video collections listed on The Pirate Bay.

For keen Prince fans there are also some oddities that can’t be found anywhere else, legally at least. In addition to rare bootlegs, remixes and 12″ collections, there are torrents which provide access to live recordings, TV shows, rehearsals, outtakes and other unreleased tracks. 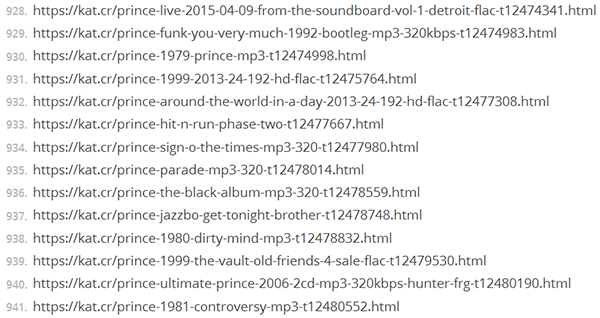 Finally, in February and March, Google received four Web Sheriff notices containing around 450 requests for URL takedowns. These are listed under the name of the Web Sheriff but with a warning sign next to each. For reasons that aren’t yet clear, Google believes that these notices were either sent by an imposter or amounted to some other abuse of the takedown system.

We pointed out these anomalies to the Web Sheriff on Thursday but by the time of publication we were yet to receive an explanation.

“It seems to have been an error as to which Web Sheriff accounts [Google] have ‘accepted’ as being bona fide for complaints etc and which is being rectified,” the company said.