Raging Anti-Piracy Boss Goes on a Tirade Against BitTorrent 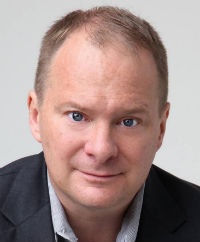 For a few years now, BitTorrent Inc. has done its best to position the company as a neutral and legitimate business.

In a recent interview with “That Was Me”, BitTorrent inventor Bram Cohen explained this challenge, as well as the general benefits BitTorrent has to offer.

The interview got some coverage here and there, including at Upstart, where it drew the attention of Robert Steele, Chief Technology Officer at anti-piracy outfit Rightscorp, a company that has made quite a few headlines this year.

Steele was not happy with the positive press coverage BitTorrent received from the media outlets, to say the least. Through Facebook (which uses BitTorrent) he wrote two responses to the article, which are worth repeating for a variety of reasons.

The comments appear to have been made late at night, possibly under influence, so we have left them intact and unedited for authenticity’s sake. Steele starts off by claiming that BitTorrent was designed for only one reason – to distribute pirated content.

“Absolutely ridiculous. Bram Cohen said in 2012 that ‘my goal is to destroy television’. BitTorrent’s architecture and features are designed for one reason only – to assist people in avoiding legitimate law enforcement efforts when they illgally consume other people’s intellectual property,” Steele begins.

It may not come as a surprise that Steele is quoting Cohen out of context. At the time, BitTorrent’s founder was actually referring to his new streaming technology, that would make it possible for anyone to stream video content to a large audience at virtually no cost.

Also, BitTorrent isn’t in any way helping people to avoid law enforcement, quite the contrary. People who use BitTorrent are easy to track down, which is in fact something that Rightscorp is banking its entire business model on.

In the second comment Steele brings in Accel, the venture capital firm that invested millions of dollars in BitTorrent Inc. According to the Rightscorp CTO Accel is also guilty of encouraging piracy, and he suggests that uTorrent should have been equipped with a blacklist of pirate torrent hashes.

“If Accell Partner’s BitTorrent was actually a legitimate business not directly involved in driving and facilitating piracy, they would have a blacklist of copyrighted hashes that the BT client won’t ‘share’. Dropbox does this. Why does Dropbox do this? Because they actually obey the law and respect content creators,” Steele says.

Steele touches on a sensitive subject here, as BitTorrent could indeed implement a blacklist to prevent some pirated content from being shared. TorrentFreak has raised this issue with BitTorrent Inc in the past, but we have never received a response on the matter. 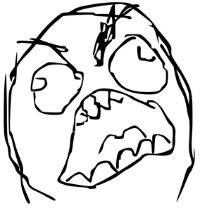 Moving on from this sidetrack, Steele’s tirade in the first comment evolves into something that’s scarily incomprehensible.

“BTTracker software is not needed unless the goal is to enable other people outside of BitTorrent, Inc. to operate the systems that log the ip addresses of infringing computers. Why do they do it that way? Not becuase it is needed to move big files. Dropbox doesnt need trackers. They do it that way because Limewire got sued for hosting those lists.” Steele notes.

From what we understand, Steele doesn’t get why BitTorrent is decentralized, which is the entire basis of the technology. The comment is wrong on so many points that we almost doubt that Steele has any idea how BitTorrent works, or Limewire for that matter.

We surely hope that the investors in Rightscorp, which is a publicly traded company now, aren’t reading along.

Finally, Rightscorp’s CTO suggests that BitTorrent and its backers should be taken to court, to pay back the damage they cause to the entertainment industries.

“Bram Cohen and Accell Partner’s BitTorrent should be held accountable for the wages and income they have helped take from hundreds of thousands of creative workers just like Limewire, Grokster, Aimster, Kazaa and Napster were.”

From the incoherent reasoning and the many grammar and spelling mistakes we have to assume that Steele wasn’t fully accountable when he wrote the comments. Perhaps the end of a busy week, or the end of an eventful night.

In any case, we’ve saved a copy of the comments below, just in case they are accidentally deleted. 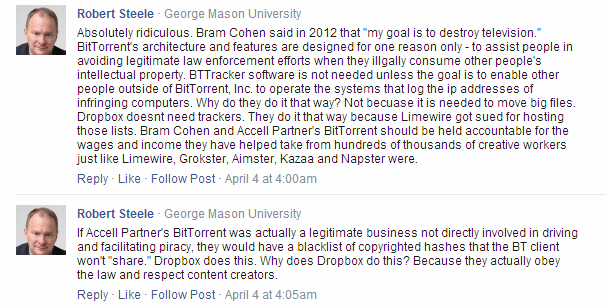