In recent years the Swiss-based file-hosting service has made tremendous efforts to cooperate with copyright holders and limit copyright infringements.

The company adopted one of the most restrictive sharing policies of all cloud providers. This resulted in an exodus of users, which cost 75% of RapidShare’s employees their jobs.

After the U.S. Government labeled the site as a “notorious” piracy-facilitating market a few years in a row, the company decided that it had to change the negative perceptions in Washington. To do so, RapidShare retained the lobbying firm Dutko.

“We decided to increase our efforts to explain what RapidShare really stands for and how we are spearheading the industry’s efforts to combat copyright infringements,” RapidShare attorney Daniel Raimer told TF at the time.

These efforts soon paid off, as RapidShare was no longer listed in the Government’s Special 301 Report of notorious markets during the years that followed. This change could be directly linked to its presence in Washington, the company believed.

“The fact that we were not included in the 2011 list is a result of these educational efforts,” Raimer told us.

After joining the Washington lobby for nearly four years, RapidShare and Dutko recently decided to part ways. After spending well over a million dollars, paired with the drastic anti-piracy measures RapidShare had taken, both agreed that RapidShare’s image had significantly improved. 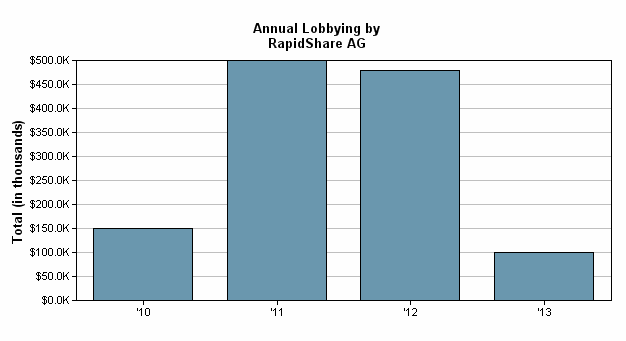 Indeed, any neutral follower of the cloud hosting industry would agree that RapidShare is no longer a piracy magnet. It therefore came as a total surprise that the U.S. Government reinstated RapidShare as a notorious market in this month’s Special 301 Report.

“Although RapidShare.com’s popularity has diminished since its 2012 listing, it remains one of the most active sites worldwide as well as in the Czech Republic, where it is best known as Share-rapid.cz,” the Government wrote.

While it may be a total coincidence that RapidShare was put back on the list after it pulled its lobbying efforts from Washington, there is something uncanny about the development. And that’s not just because the site is no longer an appealing site for those who are out to share copyrighted material.

The United States Trade Representative (USTR), who compiles the list of notorious sites, does so based on public comments from copyright holders and other interested parties. However, none of the rightsholders who submitted their input for the most recent list mentioned RapidShare, or the seemingly unrelated Share-rapid.cz. All other file-hosting sites on the other hand, were mentioned.

Of course USTR does have the right to add websites based on other sources, but it’s definitely not common, especially not when it concerns a service that has taken such a strong stance against piracy in recent years.

It’s safe to conclude that someone has been pulling some strings behind the scenes to get RapidShare back on the list, but who, will probably remain a mystery.