Founded in 2002, Swiss-based RapidShare was one of the first and most popular one-click file-hosting services on the Internet.

Like most sites of this nature, RapidShare was frequently used by people to share copyright-infringing material. It was a relationship that got the company into trouble on various occasions.

RapidShare fought many legal battles with entertainment companies seeking to hold the company liable for the actions of its users, and to top it off the site was called out by the U.S. Government as a “notorious market.”

Hoping to clear up its image the company made tremendous efforts to cooperate with copyright holders and limit copyright infringements. Among other things, the company adopted one of the most restrictive sharing policies while (re)branding itself as a personal cloud storage service.

The anti-piracy measures seemed to work, but as a result RapidShare’s visitor numbers plunged. The dwindling revenues eventually cost most of RapidShare’s employees their jobs.

Today marks the beginning of the final chapter in RapidShare’s controversial history. The company just announced that it will shut down at the end of March and is recommending that users store their files elsewhere.

“Kindly note that RapidShare will stop the active service on March 31st, 2015. Extensions of STANDARD PLUS and PREMIUM will be possible until February 28th, 2015,” RapidShare writes on its homepage.

“We strongly recommend all customers to secure their data. After March 31st, 2015 all accounts will no longer be accessible and will be deleted automatically,” the company adds.

TF asked the company for further details on the planned shutdown but we have yet to hear back. The most likely explanation is that RapidShare can’t sustain its business with the smaller number of users it has today.

The demise of RapidShare marks the end of an era. Half a decade ago RapidShare was listed among the 50 most-visited sites on the Internet, with hundreds of millions of page-views per month, but in a just a few weeks it will be gone.

Update March 31: RapidShare has shut down. 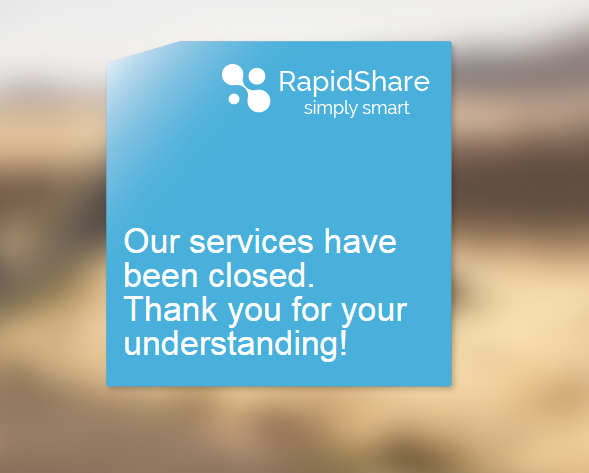