With millions of daily users, Reddit is without a doubt one of the most visited sites on the Internet.

The community-oriented platform has “subreddits” dedicated to pretty much every topic one can think of, including several that are linked to online piracy and related issues.

A few years ago copyright holders paid little attention to these discussions. In 2017, the site ‘only’ removed 4,352 pieces of content in response to copyright holders’ complaints. Three years later, however, this number has skyrocketed to hundreds of thousands.

This surge in takedowns is highlighted in the social media platform’s latest transparency report, published just a few hours ago.

The company reports that it received a total of 86,866 takedown notices, which resulted in 375,774 pieces of content being removed. This is a 300% increase compared to the previous year.

While the number of takedown notices and removed content has skyrocketed, Reddit also rejected many complaints. Last year, the site decided not to remove roughly 27 percent of the 517,054 items that were flagged.

The reasons to reject takedown requests vary. The vast majority were duplicate requests, but Reddit also refused takedowns because an entire subreddit was targeted, the reported link wasn’t a Reddit URL, or simply because no infringement was found. 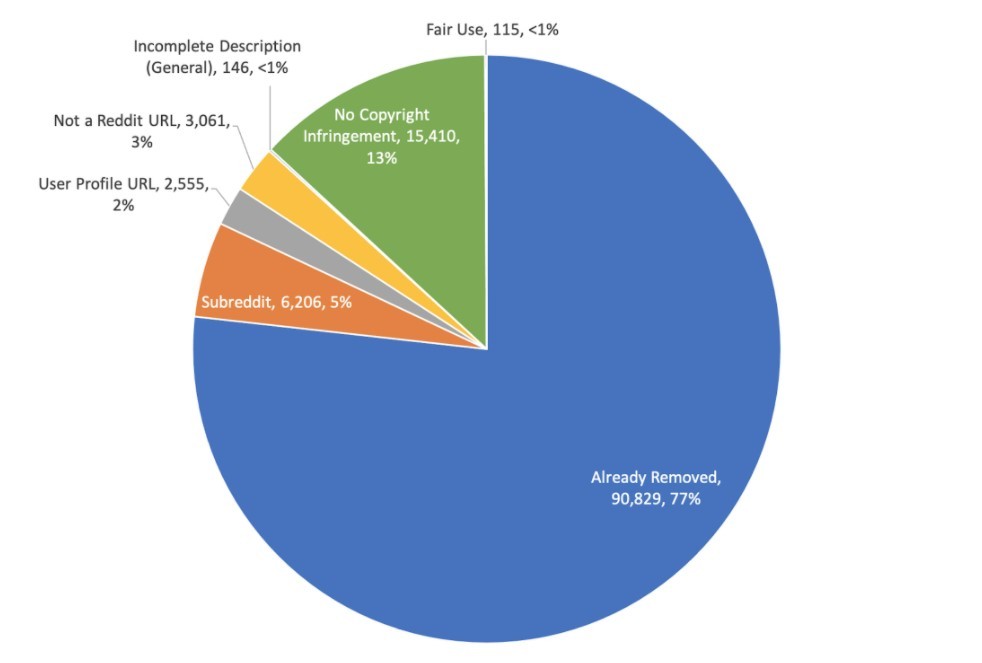 In addition to links and other content taken down, Reddit also reports how many users and subreddits were removed from the platform on copyright grounds. This typically happens when they are classified as repeat copyright infringers.

“We have a policy that includes the removal of any infringing material from the Services and for the termination, in appropriate circumstances, of users of our Services who are repeat infringers,” Reddit writes.

In 2020, Reddit removed 303 users following repeat copyright infringement complaints, which is a small increase compared to last year. The number of subreddits that were taken down under this policy saw nearly a fourfold increase, from 137 in 2019 to 514 last year.

In the past we have seen several instances of subreddits being removed for repeat copyright infringements, including /r/mmastreams. Other subreddits, such as /r/piracy, were repeatedly warned and had to clean house in order to survive.

Finally, Reddit also received several 143 counternotices from users who argued that their content had been removed without a proper reason. It’s not clear how many of these were reinstated.

All in all, copyright takedowns only result in a small fraction of all content that’s removed from the platform. In total, Reddit admins and moderators removed more than 225 million pieces of content for a variety of reasons.