Reddit is without doubt one of the most visited sites on the Internet.

The community-oriented platform has “subreddits” dedicated to pretty much every topic you can think of. These result in a constant stream of discussions and links, all generated by the site’s users.

While most links remain within the boundaries of the law, on occasion users share copyright-infringing material. This means that, as required by law, Reddit also has to process a steady stream of takedown requests from rightsholders.

To give the public insight into the process and volume, Reddit started publishing a transparency report in 2014. At the time, the company received roughly one takedown notice every other day of which more than half were rejected. However, times have changed.

In the most recent report, published a few hours ago, the company states that it received 34,989 copyright notices last year, which resulted in 124,247 pieces of content being removed. This is a five-fold increase compared to the year before and 20 times more than in 2017. 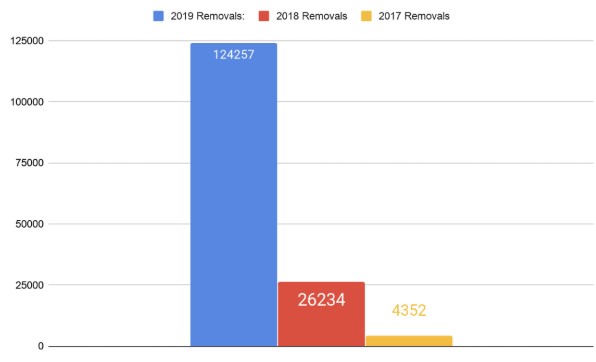 For the first time, Reddit also reports how many users and subreddits were removed from the platform on copyright grounds. This typically happens when they are classified as repeat copyright infringers.

“Sometimes a repeat infringement problem is limited to one user and we close just that user’s account. Other times, the problem pervades a whole subreddit community and we close the subreddit,” Reddit explains.

In 2019, Reddit removed 283 users following repeat copyright complaints and 137 subreddits were taken down under this policy. This includes the popular mmastreams subreddit, which we reported on previously.

While the number of takedown notices and removed content has increased dramatically, Reddit also rejected a significant number of complaints. Last year, the site decided not to remove 46,427 pieces of content, which is roughly 27 percent of the total volume.

The reasons to reject takedown requests vary. The vast majority were duplicate requests, but Reddit also refused takedowns because an entire subreddit was targeted, or simply because no infringement was found. 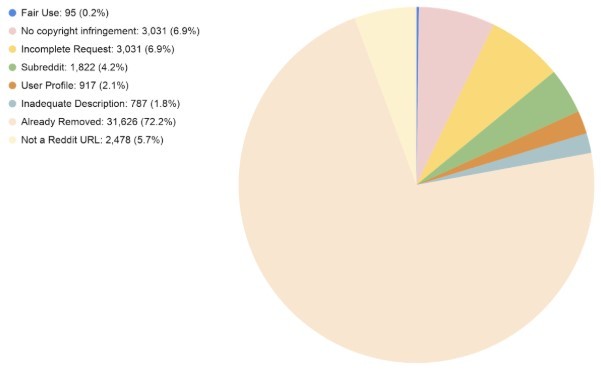 Reddit reports that one copyright holder retracted a takedown notice. In addition, the site received seven counternotices from users who disputed a claim, after which three items were restored.

All in all the transparency report shows that the number of takedown notices is skyrocketing. While this might be a sign that more copyright infringement is taking place, it’s also very likely that rightsholders are paying more attention to the site now.

It’s noteworthy that some of the language used in Reddit’s report has been updated as well. In the first transparency report the site wrote that “links do not generally infringe copyright” as they link to content on external websites. That mention is no longer present.