When it comes to movie piracy Hollywood tends to be most concerned about unauthorized copies that appear online when a film is still paying in theaters.

These are often CAM releases, which are copies of the movie recorded in a theater. Despite their low quality, these CAMs are often downloaded hundreds of thousands if not millions of times.

To find out what effect these downloads have on box office revenues APAS Laboratory researcher Marc Milot conducted a thorough field study. By using download statistics from the torrent site Demonoid, in combination with movie ratings and pre-release buzz, the research estimates the effect of CAM piracy on box office sales.

The findings, published this week in a paper titled “Testing the lost sale concept in the context of unauthorized BitTorrent downloads of CAM copies of theatrical releases”, reveal an intriguing pattern.

Based on a sample of 32 widely released movies, the results show that box office revenue could be best predicted by pre-release buzz and to a lesser extent by the rating of the movies, which were both taken from Rotten Tomatoes. Interestingly, the amount of times a movie was pirated had no effect on its box office sales.

Instead of a link with sales, the amount of unauthorized downloads was affected by how visible these titles were on Demonoid. TorrentFreak contacted Milot, who believes that these results support the notion that many pirates download movies to discover new content.

“The research findings are the first to support with concrete behavioral evidence what BitTorrent file-sharers have been saying all along: that they don’t always download movies – in this case CAM versions of theatrical releases – they would have paid to view if they were not available on sites like Demonoid,” Milot told us.

This notion is supported by the fact that, unlike at the box office, the rating of a movie doesn’t affect the piracy volume. This finding is based on ratings by both Pirate Bay and Rotten Tomatoes users, to control for the possibility that pirates simply have a different movie taste. 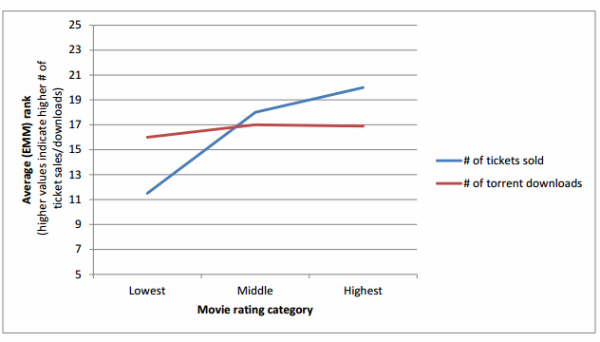 According to the researcher, these results should caution the movie industry not to overestimate the effect of CAM piracy on box office sales.

“BitTorrent site users appear to be exploring and downloading the most visible movies, without caring how good or bad they are. It is in this way that BitTorrent sites and the box office are completely different systems in which people behave uniquely and with different motivations,” Milot explains.

“These findings should caution against the use of download statistics alone in calculations of losses – in this case lost ticket sales – to avoid overestimation,” he adds.

Whether the above will be a reassurance for Hollywood has yet to be seen. There have been several studies on the impact of movie piracy in recent years, often with conflicting results. The current research helps to add yet another piece to the puzzle.