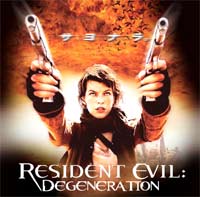 ‘Resident Evil: Degeneration‘, or ‘Biohazard: Degeneration’ as it’s known in Japan, will never become a blockbuster film, simply because it is only set for release in a few movie theaters. On the Internet, however, its popularity exceeds all expectations.

The film, produced by Hiroyuki Kobayashi, is set for a Sony Pictures DVD release in the USA on December 30. A few days ago it leaked onto the Internet and since then it has already been downloaded a million times via BitTorrent.

This is not the first time that a movie quickly became popular online due to the release of a pirated copy. “The Man from Earth” is another example of a film that became immensely popular due to its distribution on BitTorrent. Contrary to the opinion of the big studios, many independent filmmakers see piracy as free promotion instead of a threat.

The data for our weekly download chart is collected by TorrentFreak, and is for informational and educational reference only. Currently both DVDrips, DVD Screeners and R5 rips are counted.